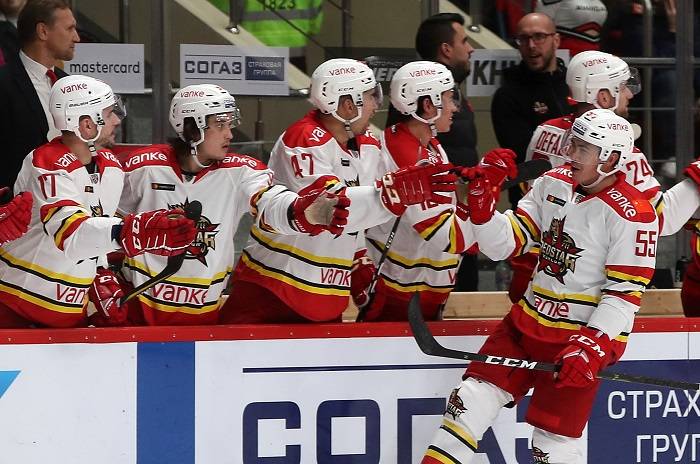 Two goals from Jason Fram set the Dragons on the way to a memorable victory over last season’s Gagarin Cup finalist. It was a result that few outside of the Red Star camp would have anticipated – only once in nine meetings had we defeated Avangard, and never on the road – but a terrific performance in Balashikha secured a fantastic result and got our latest road trip off to the perfect start.

Coming into the game, there were changes to the roster. Ryan Sproul and Griffin Reinhart, recently arrived from across the ocean, suited up for their KHL debuts. Sproul was paired with Trevor Murphy in the first defensive pairing, while Reinhart slotted in alongside Fram on the third line. Both played a significant role in securing Jeremy Smith’s second shut-out of the season, with Sproul in particular catching the eye in the second period when he made a fantastic goal-line save to deny the home power play. Reinhart also made a meaty contribution, leading the team in blocked shots.

But two encouraging defensive debuts were outshone by Fram’s two-goal show. The 24-year-old is in his first KHL season and today brought his first goals in the league. The first came early in the second period, opening the scoring after Red Star won an attacking face-off and Ethan Werek steered the puck back to the point for Fram to unleash his shot. Home goalie Alexander Sudnitsin was screened by his own defenseman, Cody Franson, and could not react in time to get behind Fram’s thunderbolt.

That goal was a deserved reward for Red Star’s second-period efforts. After an opening frame dominated by the high-flying host, our guys dug in after the intermission and began to pressure Avangard. Even when facing a delayed penalty, the Dragons could pose a threat as Slava Voynov discovered when his careless no look pass on his own blue line floated perilously close to the empty home net. After Fram’s opening goal, Voynov slipped again as Olli Palola pressed him. The defenseman, rated by many as the best in the KHL, misplaced his pass and presented Brandon DeFazio with a scoring chance. Sudnitsin spared Voynov’s blushes on that occasion but was powerless midway through the game when David Bondra’s feed to the deep slot saw Trevor Murphy shoot home Red Star’s second. Bondra, another player who made a slow start to life in the KHL, got his first goal in the win over Sochi on Monday and added two more points to his tally today.

Avangard continued to pose a threat, and Sproul’s athleticism denied a certain goal late in the frame as the home team probed on the power play. Our newcomer was alert to the danger during a scrum on the slot and his outstretched skate rescued the sprawling Smith and blocked the puck on the goal line. Our goalie would go on to stop 34 shots in the game, a contribution as vital as Fram’s scoring exploits at the other end.

It was no surprise that Avangard threw everything forward in the third period, looking for a way to save the game. But Smith was in uncompromising mood and when a rare counter-attack came Red Star’s way our finishing was clinical. Bondra powered down the left, whipped the puck across the danger zone and there at the back door was Fram, ready to tuck away his second of the night. With 10 to play, the result was almost beyond doubt, although there was still time for Smith to pull off a save to deny Sven Adnrighetto and leave even the home commentators purring at the goaltender’s skills.