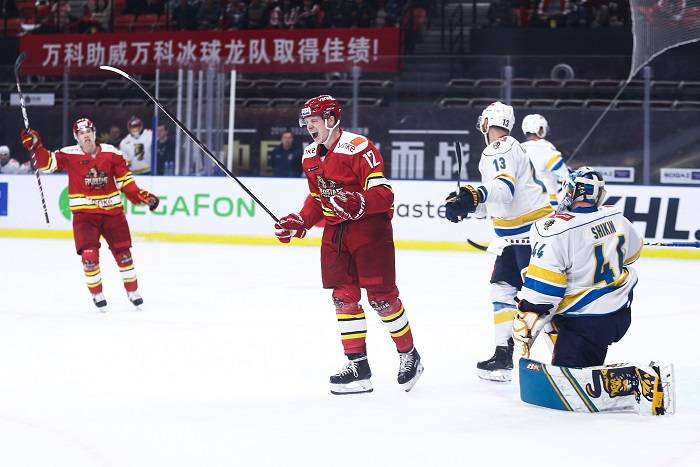 The Dragons are back in flight! Monday’s win over HC Sochi lifts our guys off the foot of the Eastern Conference table and puts the team within a single point of a playoff place. It’s a tight league table – currently just seven points separate basement club Amur from fifth-placed Salavat Yulaev, and the gap from top to bottom is a mere 11 points – and it’s clear that any team able to string a winning run together can rocket from the basement to a comfortable base camp in the top eight.

Following Saturday’s frustrating loss against Dynamo, Curt Fraser made few changes. Olli Palola came in for Brandon DeFazio and Jeremy Smith took his place in goal as he continues to rotate starting duties with Simon Hrubec. Otherwise, though, it was an unchanged line-up – with the defense unchanged for the second game running.

That kind of consistent selection on the blue line has been something of a rarity this season and there was every reason to hope that we would be rewarded with a more stable, disciplined performance than in some recent games. However, the early exchanges landed Kunlun in trouble as Sochi took the lead with a somewhat fortuitous opening goal in the third minute. Denis Mosalyav went around the back of the net but there seemed to be little danger as he swung the puck into a group of Red Star defensemen on the slot. Unfortunately, the bounce went against our guys and dropped perfectly for Artyom Tomilin to rifle home from between the hash marks.

But the end of the first period saw the Dragons roar into the lead with two goals in two minutes. It was a just reward for an impressive reaction to falling behind. Red Star spent more than seven minutes on the attack in the opening stanza, made 32 attempts on the goal and forced Dmitry Shikin into action on 19 occasions. More impressive still, Curt Fraser’s team stayed out of the box: with a full complement of players on the ice, this team has far more opportunity to demonstrate its hockey props.

The pressure yielded a tying goal in the 18th minute as David Bondra opened his account for the club. The Slovak international, son of the legendary World Champion Peter Bondra, arrived in China on a try-out contract in the summer and did enough to earn himself a longer-term deal. Today he got his first goal, turning up on the slot to steer home an Andrej Sustr feed as the Sochi defense crumbled under the Kunlun onslaught.

Two minutes later, it was 2-1. Adam Cracknell advanced down the left before sending the puck back to the point. Trevor Murphy came charging into position and smashed home a one-timer that whistled into the net with no chance for Shikin.

The good news continued early in the second period as Gilbert Brule made it 3-1. Andrew Miller started the move, intercepting the puck as it looped into the Red Star end and surging forward on an odd-man rush. Within sight of the Sochi net, it took two passes – Miller to Brandon Yip, Yip to Brule – to carve out another scoring chance and open a two-goal lead.

However, Sochi was not willing to allow another period of Dragon dominance like the first. The middle frame was far more even, with the home PK tested for the first time on the night, but Jeremy Smith held firm to keep that advantage intact into the third period.

That final frame saw one last push from the visitor and a scrappy, hard-earned goal for Stepan Starkov to halve the deficit. But it also saw some composed home defense – and more impressive discipline – to close out the game and secure the verdict.

That concludes our first run of games in Beijing on a high note and sets the team up for its next road trip. Later this week, we’re off to Moscow’s outskirts for games at Avangard and Vityaz, then it’s on to Dinamo Riga and Torpedo to finish off October’s schedule.