Looking to close the gap 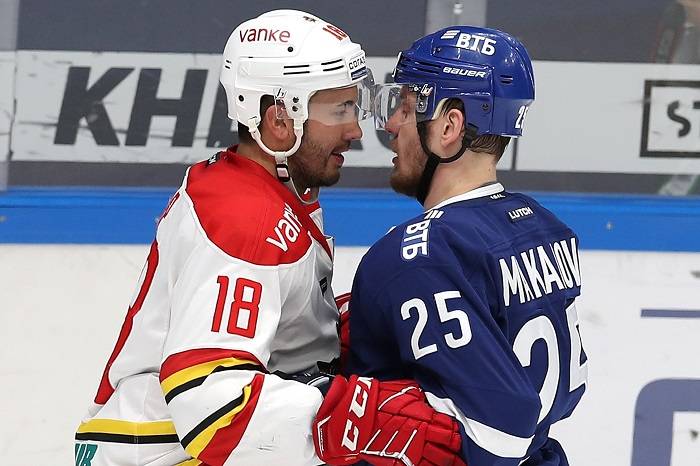 After two performances let down by frustrating errors on defense, the Dragons go into the last two games of our current home stand with a new recruit in the ranks. Ryan Sproul, a 26-year-old defenseman previously with the Red Wings organization, has signed a one-year deal that promises to bring some extra zip to our blue line.

He joins up with Curt Fraser’s roster ahead of games against Dynamo Moscow and HC Sochi. Red Star goes into action with the playoff places in sight: the Dragons are currently just two points adrift of eighth-placed Traktor, and the Chelyabinsk team has played three games more.

Last season: Both meetings with the Blue-and-Whites ended in narrow losses. In Moscow, Red Star led twice on goals from Olli Palola and Veli-Matti Savinainen but went down 3-4. A couple of weeks later we met again in Shanghai and saw a 2-0 lead turn into a 2-3 loss. Indeed, Kunlun has so far taken just one point from its six meetings with Dynamo after taking the home game in 2017/18 to a shoot-out.

Background: Consistently inconsistent. That’s the summary of Dynamo Moscow’s season so far. Alternating a couple of wins here with a few defeats there, the Blue-and-Whites have managed to avoid a crisis without convincing anyone that this is the nucleus of a serious contender for honors.

On the plus side, experienced head coach Vladimir Krikunov can call on some big hitters to boost his team: Vadim Shipachyov has 21 (6+15) points to place him second to Kirill Kaprizov in the KHL scoring race, while Juuso Hietanen is the most productive defenseman with 15 (6+9) points from his team’s 19 games to date. Shipachyov has found handy support from imports Andre Petersson and Dmitrij Jaskin. That trio has been particularly effective on the power play, potting seven goals when the team has a man advantage and combining with Hietanen for two more PP efforts. There’s also encouraging news in goal, where Ivan Bocharov continues to develop after establishing himself as first choice ahead of veteran Alexander Yeryomenko.

But there’s a lack of depth to the team at present. If Shipachyov’s line does not deliver, few others step up regularly. Miks Indrasis and Vyacheslav Kulyomin alternate devastating performances with anonymous ones and the rest of the roster lacks experience at this level. For sure, Dynamo remains a dangerous opponent. However, the 2019 team is one that Curt Fraser and his guys will believe can be beaten in China for the first time.

Last season: Red Star picked up its first point of last season in Sochi, collecting a bonus point in a shoot-out loss. In Shanghai, Jussi Tapola’s team went one better with a 3-0 victory in September. That’s the biggest margin recorded in the six games between these teams and it ensured that both clubs were level on three wins apiece.

Familiar faces: Sochi Forward Sean Collins is well remembered for his contribution to our first season in the KHL, where he scored 42 (15+27) points in 65 appearances including the playoffs. Goalie Ivan Nalimov is also on the books for the Black Sea club after joining from SKA. He played four times for Red Star last season.

Background: The Leopards have not enjoyed the start to this season. Sochi has dropped out of the playoff places and the Black Sea team is on a difficult streak. A sequence of just two wins in 10 games cost head coach Sergei Zubov his job. Experienced Latvian Leonids Beresnevs was placed in temporary charge but couldn’t spark a change in fortune: his team has lost at home to CSKA and Metallurg as the losing streak stretched to five games.

Although Beresnevs is listed as interim head coach, General Director Sergei Voropayev suggested that the Latvian could be in for the long haul in an interview with Championat.com. “Right now, we’re not looking for anyone else. The coaching staff is all staying with us. We have faith in Beresnevs, he’s an experienced coach. He understands our situation and knows what to do. He’s done this more than once with Team Latvia, when there’s a crisis, they call for him.”

Amid the gloom, there have been some bright spots. Sergei Shmelyov shows signs of reproducing the kind of productivity that marked him out as a player to watch when he emerged at Atlant, while Swedish strike duo Malte Stromvall and Robert Rosen lead the team in scoring with 22 points between them. Recently, though, goals have been hard to come by and Sochi was blanked twice in its last three games.