Offensive power from the blue line 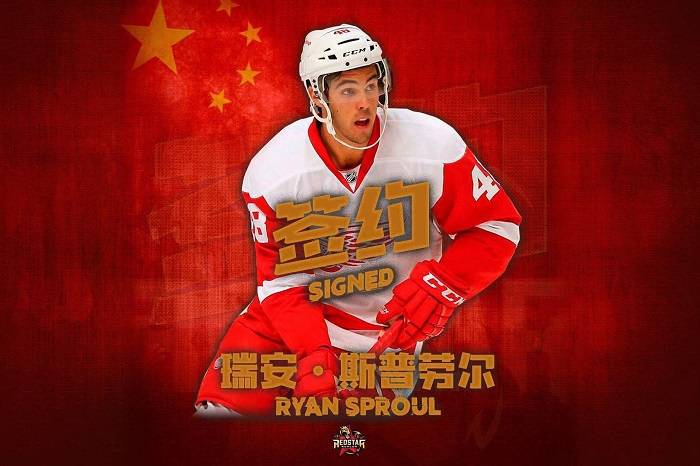 Free-scoring defenseman Ryan Sproul is the latest recruit to join the Dragons. The 26-year-old former Red Wings prospect is set to bring some serious scoring to our blue line and add a valuable new weapon to our arsenal.

The Ontario native made a huge impact in junior hockey, where he grew into a leader with Sault Ste. Marie. In three seasons he scored at a rate of 0.89 points per game. Two of those three campaigns saw him named the top goalscoring D-man in the league, the last brought 66 points as he topped the scoring from the blue line.

Those stats attracted Detroit’s attention and he was drafted in the second round in 2011. His time within the Red Wings organization saw him primarily deployed in the AHL. Opportunities in the big league were limited but life at the Grand Rapids Griffins helped Sproul to develop his skating and his defensive skills. Frustratingly, just when it seemed the breakthrough was imminent – 27 NHL outings for 7 (1+6) points in 2016/17 suggested he was finding a role with the Wings – an ACL injury halted his progress.

After four full seasons with the Red Wings, Sproul moved on to join the Rangers and added one more goal in 16 NHL appearances. Again, though, he played the bulk of his hockey in the AHL and again he proved to be a reliable two-way contributor. Last season he played the bulk of his hockey with the Hershey Bears. He arrives in China with 44 NHL appearances and 12 (2+10) points, and a wealth of experience in the AHL (328 games for 149 points at an encouraging 0.45 ppg).

The key to getting the best from Sproul was summed up by Jeff Blashill, his coach in Detroit. “When Sproully plays his best, he goes back to pucks and he breaks it out with his feet,” Blashill said in September 2017. “He’s got to make sure he’s fast back to the puck, he’s got to make sure he spends as little time in the D zone as possible so he can use his best assets, and that’s his feet and his shot.”