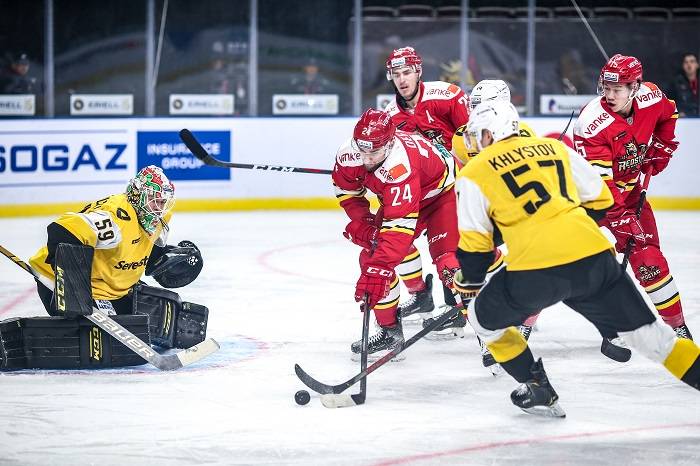 This game was all about the bounce back. After suffering a heavy loss in Sunday’s error-strewn performance against Lokomotiv, Kunlun needed to show that it could put that disappointment behind it and get back to picking up points during this home stand in Beijing. After Amur’s win in Tuesday’s early game, Red Star needed a result to stay in ninth place; a victory would close the gap to the playoff places to just one point.

In the event, there were positive signs from a competitive performance, but the final verdict saw the Dragons miss out in the final second of overtime. However, as head coach Curt Fraser admitted, there were weaknesses on defense again and the team was over-reliant on its goaltending to stay in the game, particularly in the later stages.

Fraser returned Jeremy Smith to the goaltending role after Simon Hrubec started the two previous games. The Czech, who was pulled from the net during the Lokomotiv game, was selected ahead of John Muse as the understudy netminder. Smith dealt confidently with the efforts of Severstal in the first period as both teams tried to convert attacking possession into genuine scoring chances. In truth, there was little to choose between them at the first intermission; Severstal’s slight edge on the stats attributable more to gaining the only power play of the opening frame than to any greater control of the play.

The second session was broadly similar – but the key difference came in the 27th minute when Red Star took the lead. It started with our guys’ first power play of the night, which gave a chance to build up some serious pressure on Vladislav Podyapolsky in the visitor’s net. Severstal killed the penalty, but even at full strength it could not dislodge the puck from its zone. Mathew Maione and Trevor Murphy kept the play moving along the blue line before Murphy’s feed found Ethan Werek and his shot from the bottom of the circle was true.

That goal broke the deadlock but did not inspire a rush of attacking hockey. The second period was still an even battle and only in the third did Severstal start to take the initiative. With five minutes to play, the visitor tied it up when Andrei Alexeyev arrived at the back post to steer home a shot from Vladislav Kodola. The puck was in the Dragons’ net once more following a powerful effort from Ilya Khokhlov, but on that occasion the officials ruled that Yury Trubachyov had impeded Smith and the goal was whistled off.

And so to overtime where, this season, Kunlun has enjoyed better fortune than in recent campaigns. Four previous games had gone beyond 60 minutes, and Red Star went on to win three of them. Today, though, the verdict went the other way. Spencer Foo took a penalty and gave Severstal the chance to push for a winner; with one second left Vladislav Provolnev found it. A single point keeps the Dragons in ninth place, two adrift of Traktor, which has played twice more.