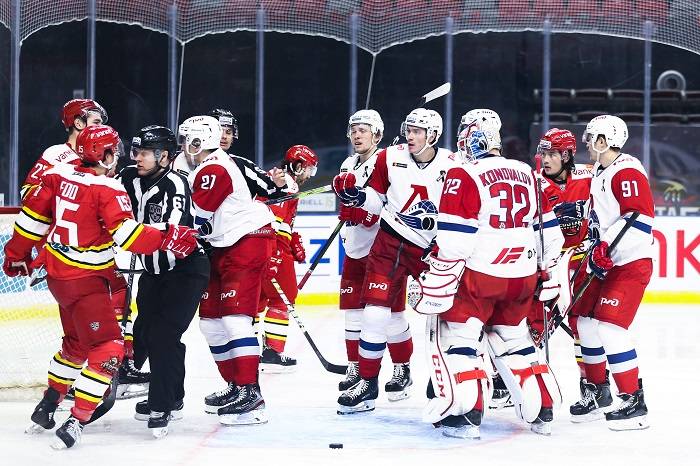 Hockey is noted as the fastest team game on Earth, and the second period of today’s match-up against Lokomotiv showed exactly why. The teams went on a scoring flurry, trading five goals in five minutes of helter-skelter action at the Shougang Arena.

We saw a power play goal, a short-handed goal, a tally scored straight from a face-off in center ice. The only frustration for home fans was that three of those markers went to Lokomotiv and the visitor ultimately skated to a 6-3 success that halted our winning start to life in Beijing.

The Railwaymen produced a ruthless display, punishing defensive errors to the full. And, on this occasion, the Dragons’ defense made too many mistakes to stay competitive in a high-scoring game. There was an early warning when Jakub Nakladal roamed forward to fire against the outside of the post, and the only goal of the first period came when an Andrej Sustr clearance bounced off the skate of Cory Kane to set up Denis Alexeyev for an opportunistic opener.

Then came that goal rush. First, Pavel Kudryavtsev stole the puck and set up Ty Rattie for 2-0. Just 17 seconds later, with Red Star on the power play, Kudryavstev snaffled a short-handed goal after an Anton Lander intercept. But the power play continued, and Kunlun found a response when Spencer Foo seized the puck in center ice and took matters into his own hands with a powerful surge into enemy territory. A backhand feed set up Gilbert Brule, a backhand finish got our guys on the scoreboard.

Those defensive jitters weren’t going away, though. Twice, Red Star fluffed chances to clear its line and young defenseman Daniil Misyul capitalized to chase Simon Hrubec from the net and bring John Muse to the crease for his first KHL appearance. He’d been in place a mere nine seconds when he saw his team-mates score; Trevor Murphy sped down to the right corner and fired the puck to the danger zone where a deflection off Nakladal steered it into the net.

A freakish moment almost had Kunlun right back in the game. Short-handed, Mathew Maione opted for a big heave down the ice from deep in his own zone. The puck pinged back crazily off the roof of the cage and hit Ilya Konovalov on the back of the head, but the young goalie managed to react in time to scramble it off his goal line with a combination of leg and skate. A different bounce could have sent us into the third period with a one-goal game but instead Nakladal added a power play goal to restore Loko’s three-goal cushion.

From there, it was always going to be a tall order to salvage this game. There was some encouragement in the third as a power play move saw Brule combine well with Brandon Yip to give our captain his fifth of the season. At the other end, though, Kudryavtsev got his second of the afternoon as the Dragons slipped to a disappointing defeat.