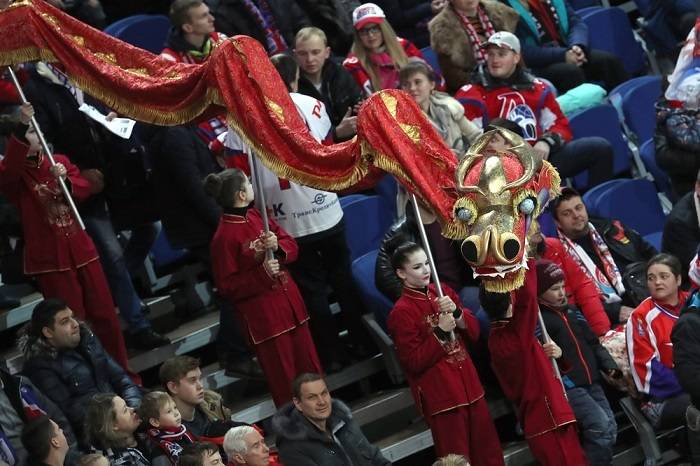 Returning to Beijing brought back-to-back wins for the first time this season. Now the Dragons have the chance to extend that streak further against two opponents from the Western Conference. Sunday sees the visit of a Lokomotiv team still struggling to build up a head of steam this season, then Tuesday pits us against Severstal. Recent results against these two opponents have not been impressive – so it’s a perfect time to put the record straight.

Last season: Loko has always been a tough opponent for the Dragons and last season was no exception. A battling shoot-out defeat in December represented our first ever point in Yaroslavl, but the following month brought a 1-5 reverse at home. Red Star has won just one of six meetings with the Railwaymen and, more worryingly, has scored just five goals in the last five encounters.

Familiar faces: Our recent signing on defense, Denis Osipov, played for Lokomotiv. In 2016/17 he helped the team to the playoffs, producing 5 (2+3) points in 20 regular season outings. The following year brought another 20 appearances before he moved to Dinamo Minsk. Lokomotiv goalie Alexander Lazushin, meanwhile, is well known to Dragons fans. He was our #1 netminder last season, collecting 12 wins in 39 appearances and claiming five shut-outs.

Background: Lokomotiv is usually found at the top of the Western Conference, jockeying for a seeded place in the playoffs. Not this season. The short-lived reign of Craig MacTavish as head coach saw the team slump to the foot of the table and, at the time of writing, only Dinamo Riga has a worse record in the entire KHL. Alexander Ardashev’s spell as interim head coach has steadied the ship somewhat with Loko winning two of the last three games.

However, there is no sign of a permanent appointment behind the bench and statements from Yaroslavl suggest no news will be forthcoming in the coming days. Last week, General Manager Yury Lukin admitted that there was no deadline to make a decision and several candidates were in contention.

On the playing side, forwards Anton Lander and Stephane da Costa arrived in the summer to add muscle to the Loko offense. They currently lead the team’s scoring but have yet to produce the kind of dominant form hoped of before the season. Lokomotiv’s renowned youngsters have also been affected by the patchy start to the current campaign with goalie Ilya Konovalov only recently reclaiming his place as first choice while the hotly-tipped attacking trio of Grigorenko, Ivanov and Kovalenko have managed just three goals between them so far.

Last season: December saw the Dragons get their first point in Cherepovets when Brandon Yip’s late goal forced a 1-1 tie at Severstal. The return game in Shanghai a month later ended in a 1-4 defeat.

Background: Ahead of the weekend’s games, Severstal and Kunlun had almost identical records, with 15 points from 16 games and four wins apiece in regulation. Red Star had a slightly better goal differential but both teams found themselves just outside the playoff positions in their respective conferences. Even recent form was pretty similar; the teams each had three wins from the last five games and one of those came in a shoot-out.

Like Lokomotiv, Severstal has a youthful roster. Emerging talents like Igor Geraskin and Adam Liska have made handy contributions this season, while the team’s leading scorer, Daniil Vovchenko, is still only 23. Under the guidance of colorful head coach Andrei Razin, the Steelmen have proved capable of testing some of the league’s big hitters: a 5-1 win at Avangard was a stand-out result, while the last game saw Severstal stop Oleg Znarok’s Spartak after it defeated high-flying Vityaz, SKA, Avtomobilist and Avangard in the previous couple of weeks. However, consistency can be a problem: the team’s last road trip brought heavy losses in Ufa and Nur-Sultan.