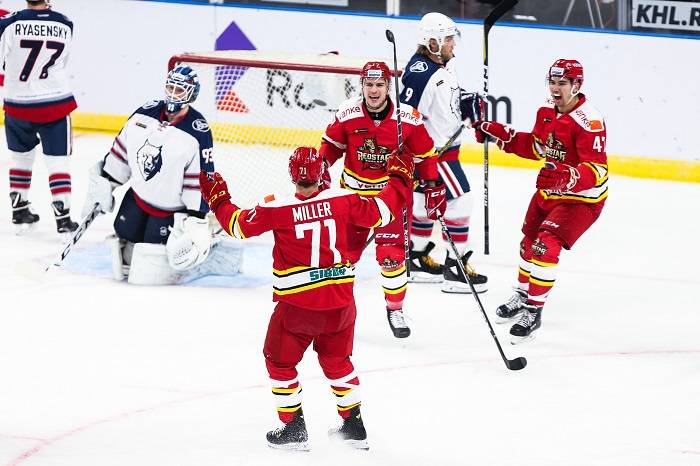 Shenzhen was a great experience; our first road trip was a valuable opportunity to help bring the team together – but there’s nothing quite like returning home. Beijing’s Shougang Arena, opened at the end of last season, is Kunlun’s permanent home and the season here began at last on Wednesday with the visit of Neftekhimik. It was a big game between two teams jockeying for position in the logjam in the lower half of the Eastern Conference and it ended in a morale-boosting victory for our guys as they settled into life in the Chinese capital.

Red Star made a blazing start to this game. Almost from the first shift, the home team put pressure on the Neftekhimik net and after just 78 seconds the Dragons had their first power play of the night. Then a further 60 seconds elapsed before Andrew Miller’s first big contribution of the night. Collecting the puck in center ice, our forward powered into the visitor’s zone, slithered away from Neftekhimik captain Stepan Zakharchuk and deked past Alexander Sharychenkov to open the scoring. After just 138 seconds of action in Beijing, we already had a highlight reel moment to savor.

And Miller was heavily involved again as Gilbert Brule doubled our lead on our next power play chance. This time he took a pass from Brandon Yip, smashed in a shot and saw Brule apply the redirect on the slot to beat  the goalie and force Vyacheslav Butsayev to substitute Sharychenkov by Konstantin Barulin. Life at home was going well.

Subsequently, though, things got a whole lot tougher. Neftekhimik, looking to snap a four-game losing streak, was determined to get back into this game; apart from anything else, defeat today would see our guest drop below us in the Eastern Conference table. The pressure on Simon Hrubec’s net intensified and our Czech international was by far the busier of the two goalies. Over the course of the game, Neftekhimik led the shot count 31-17, but Hrubec came up big with 30 saves to secure the win.

The second period, in many respects, was the toughest for our guys. Minor penalties were all too frequent – four times we found ourselves on the PK – and as a result there was pressure to be absorbed. Neftekhimik was able to spend almost 10 minutes in attacking positions, but brave defense and solid goaltending kept Kunlun’s two-goal lead intact. It wasn’t always the prettiest hockey, but these are the kind of performances that bring coaches great satisfaction: a team playing with guts and character, finding a way to win even in the face of significant pressure.

The final frame proved more evenly-matched, even though Neftekhimik finally got on the scoreboard in the 48th minute to keep the game on a knife-edge until the finish. There were big moments for Hrubec, thwarting Alexander Avtsin as he slipped past three defensemen, but also good opportunities at the other end, most notably for Tyler Wong. Ildar Shiksatdarov got the consolation goal for the visitor, reacting sharply to control a misplaced shot from Arsen Khisamutdinov and squeeze an effort in off Hrubec’s post, but our guys dug deep to ensure we held on for two valuable points.

Now we get to do it all again tomorrow in the second of our head-to-head games, and another victory could lift us to ninth in the Eastern Conference.