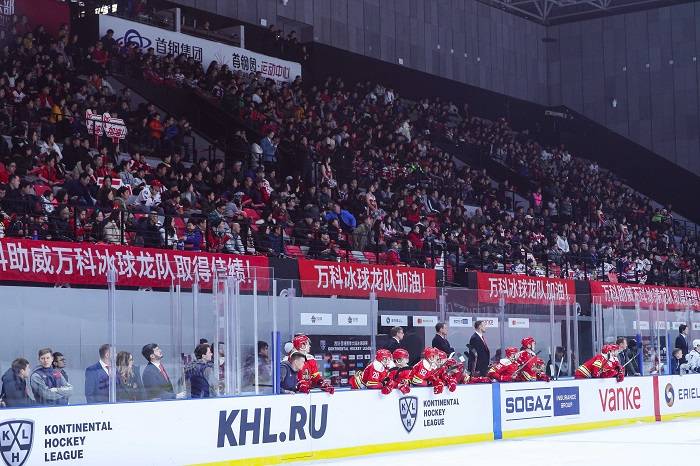 The Dragons have not played a competitive game in their Beijing lair since February – but the long wait is almost over. Wednesday sees Neftekhimik come to town for the first of two back-to-back games against one of the teams likely to do battle with us for a playoff place over the course of the season. A repeat of last month’s meeting in Nizhnekamsk would be very welcome.

Last time out: Nizhnekamsk was the scene of our first road win of the current season. Tyler Wong’s shoot-out effort separated the two teams after a 3-3 tie in regulation on September 26. Historically, we’ve had a slight advantage over Neftekhimik, winning four of our seven games. The visitor has only managed one victory in China, almost a year ago.

Familiar faces: Neftekhimik knows all about Gilbert Brule’s scoring prowess after the forward produced 32 (12+20) points in 37 games in the 2016/17 campaign.

Background: Game 15 of the season sees Red Star back home in Beijing for the first time. The Shougang Arena, opened at the back end of last season, is set to be the club’s principle venue for the foreseeable future and, for many of our players, it already holds happy memories of picking up points in front of big crowds at the back end of last season. Back in February, playing Beijing gave a real lift to a team that had seen its playoff hopes evaporate; today, hopefully, we can enjoy a similar boost after back-to-back losses in the Russian Far East saw us drop off the pace slightly in that race to the top eight.

Picking up a pair of victories against Neftekhimik would change all that, of course, and could bring us up to ninth place in the East. It’s a wholly attainable target against a team on a four-game losing streak of its own. This is an opponent particularly to the liking of our captain Brandon Yip, who has scored three times on Neftekhimik, including a goal in last month’s road win. For the opposition, the danger men are likely to be Pavel Poryadin and Matt White. However, six of Poryadin’s eight points came in the first five games of the season and he has been silenced in the last four. White, too, tends to score in streaks and has not added to his 10 points in the last three games.