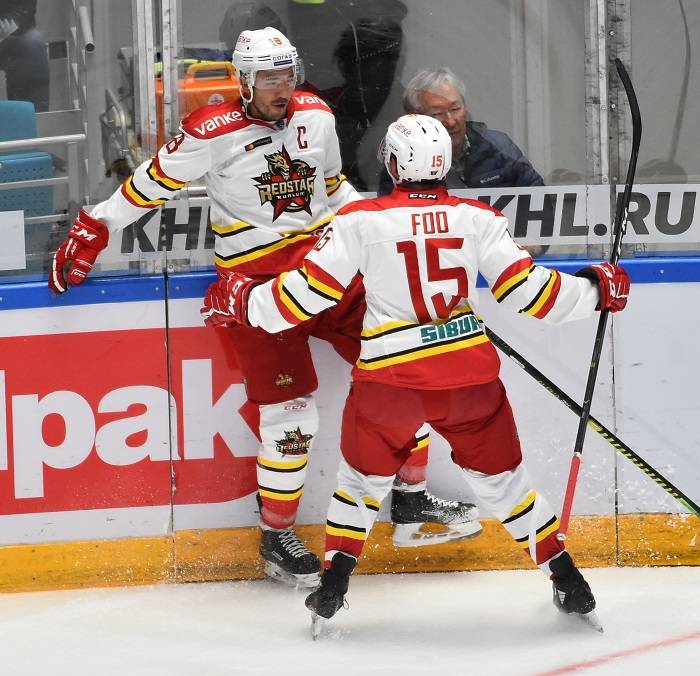 Olli Palola was one of last season’s scoring stars, finding the net 19 times in his debut campaign for Red Star. But his second season with the club started with a goal drought: the Finn failed to put up a single point in his first 10 games this time around.

Happily, all runs come to an end, and Palola picked the perfect moment to break his duck today. Early in the third period, he snapped a 2-2 tie and ushered in a final frame that brought three unanswered goals as Red Star produced an impressive response to Saturday’s disappointing loss in Kazan.

The significance was not lost on head coach Curt Fraser. Immediately after the game, he said: “We wanted to see if our guys had some resilience, if they could bounce back from a big loss. Tonight we saw what kind of a group we have, how they are capable of battling and finding a way to win these games.”

It was also encouraging to see the team score five goals for the first time this season, suggesting that a recent lack of firepower might soon be a thing of the past.

The line-up had some changes from the team that lost in Kazan, with Wojtek Wolski and Mathew Maione the highest-profile absentees. Fraser explained that this was a case of rotating resources to help players recover their form. “A couple of our guys have been struggling and I thought it was time to make a change, to give other people a chance,” he said. “Fortunately, that worked out for us tonight. We’re still going to rely on our guys that sat out tonight heavily, we’re going to have to get them back into our line-up.”

The performance in Nur-Sultan was impressive from the start. Red Star matched Barys in all departments and went ahead late in the first period. The Barys penalty kill has been formidable this season, but our first PP of the game saw the puck in Eddie Pasquale’s net. Adam Cracknell picked out Spencer Foo on the goal line and he advanced on the net to stuff the puck inside the near post. His first attempt was blocked but the second saw the puck into the net, along with the home goalie. After a long review initiated by the Barys bench, the officials determined that the play was clean and the Dragons were in flight.

That was the only goal of the opening frame, but the second began with a flurry of scoring. First, Victor Bartley took a minor penalty and Iiro Pakarinen tied the game. A Darren Dietz point shot was blocked but neither Jake Chelios nor Andrej Sustr could get the puck away from the danger zone and the Finn pounced to make it 1-1.

If that was somewhat unfortunate, the home team’s go-ahead goal was downright freakish. Roman Starchenko’s backhand shot was padded around the corner by Simon Hrubec and, as the forward followed up, his attempt to play the puck to the slot got tangled up between the goalie and Mikael Tam and squirmed inside Hrubec’s near post.

The response was swift. After winning a face-off in center ice, Red Star released Foo down the right and he spotted Brandon Yip getting ahead of his marker. The feed was inch perfect and the captain judged his redirect to make it 2-2.

After that goal rush, things quietened down and the teams were deadlocked at the second intermission. Then Palola produced the game-breaker, firing Red Star back into the lead early in the third period. The Finn, who was behind only Brandon Yip on team scoring last season, ripped home a wrister from the inside edge of the circle, shooting early to the surprise of Pasquale. It all stemmed from Brule’s epic battle with Curtis Valk at the face-off, but the play also owed something to Red Star’s opener, which prompted an unsuccessful coach’s challenge from Barys and denied the home team a time-out that it might have used to gain breathing space after a string of icings left tired legs out on the ice.

Then came a fluffed power play chance for Barys, ended abruptly when Dietz took a needless interference penalty after colliding with Hrubec, and a fourth goal for Kunlun after Tyler Wong returned to the ice. Andrew Miller did well to keep the puck alive after struggling to control Yip’s initial pass; under pressure, the forward picked out Trevor Murphy and the defenseman’s one-timer flashed past Pasquale to record his first goal of the season.

Next, Red Star produced its interpretation of the play that briefly put Barys ahead. This time Bartley stormed down the right and slung the puck to the near post when Luke Lockhart claimed his third goal of the season via the goalie’s skates. Five goals, Red Star rampant, and two wins from three on the second leg of this extended road trip.

Next up, we’re closer to home as we wrap up our journey with visits to our neighbors in Khabarovsk and Vladivostok on October 3 and 5 respectively.