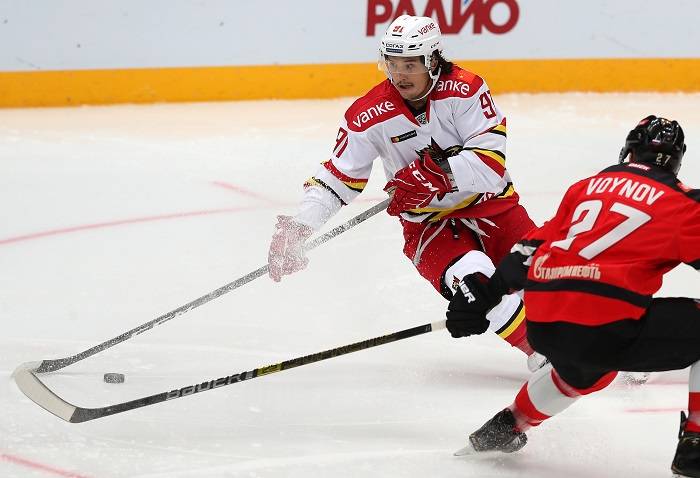 Despite another battling performance, Red Star slipped to a third successive loss on the road when it went down 2-5 at last season’s Gagarin Cup finalist Avangard. Much-titled defenseman Vyacheslav Voynov was the difference-maker, getting two goals and an assist and inspiring the Hawks' revenge for January loss to the Dragons by the same scoreline.

In the first period, though, Kunlun arguably had the better of the game. Our guys spent twice as much time on the attack and topped the shot count 12-5 after 20 minutes. The only problem was converting that pressure into goals. Spencer Foo did well to notch his second of the season, showing good hands and great perception to wire a wrister through traffic and beat Alexander Sudnitsin in the 14th minute. However, that merely cancelled out the opener from Voynov, who intercepted a pass in center ice and advanced to shoot home from between the hash marks. The scores were tied at the first intermission, and Bob Hartley’s team may have felt it had been let off the hook.

Early in the second session a power play goal changed the course of the game. Taylor Beck, fondly remembered from his time in China, showed no mercy to his former club when he fired home from a Voynov feed. This time, there was no rapid response. Instead, two further minor penalties kept the pressure firmly on Simon Hrubec in our net and made it hard to get our offense into the game. The change in momentum proved decisive: late in the frame Evgeny Grachyov made it 3-1 and, from that point on, it felt like a long way back for Kunlun.

Voynov got his second of the night on the power play early in the third and the three-goal cushion was too much to overcome. The team worked hard and again had the better of the play but, once again, struggled to get good looks at Sudnitsin’s net. The conclusion brought some consolation when Jake Chelios fired home his first KHL goal off a feed from Adam Cracknell but it was too little to salvage anything from the game.

The first, challenging road trip of the season is over. Three games against three of the strongest teams in the Eastern Conference yielded just one point from an overtime loss at Avtomobilist. Now there’s a short break before the next leg of our travels starts in Nizhnekamsk on Thursday. From there, the team goes to Ak Bars and Barys ahead of a visit to our nearest neighbors in Khabarovsk and Vladivostok at the start of October.