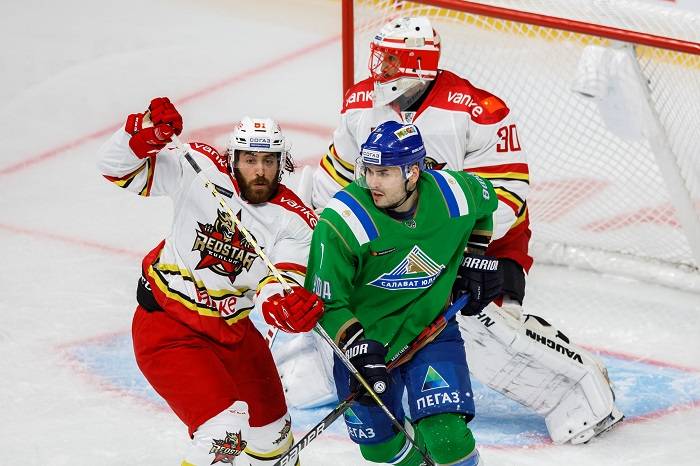 Our third meeting with Salavat Yulaev this season was another close-fought encounter. Indeed, had our team’s discipline been a little better, Red Star might have claimed its second victory of the season over the Eastern Conference finalist from last season. Instead, though, a goal on a delayed penalty wiped out our opening goal before a long 5-on-3 three penalty kill saw Ufa grab a late winner to break the Dragons’ hearts.

Gilbert Brule made a welcome return to the team after suspension, while Simon Hrubec continued in goal after getting his first win of the season in Sunday’s game against Traktor. However, Brule’s impact on the early stages was less than Hrubec’s: Salavat Yulaev had the better of the first period, helped by two power plays, and outshot Red Star 9-4.

If the first period was hard work, the second could hardly have started better. Adam Cracknell won the opening face-off, Andrew Miller sprayed the puck wide to Tyler Wong and our forward whipped a shot from the boards that startled home goalie Andrei Gareyev and floated into the top corner. Wong’s second goal in two games may not have come exactly as planned, but there’s nothing wrong with an unexpected success.

However, the penalty troubles that hampered our progress in the first period struck again almost immediately. A raised arm from the officials indicated a delayed tariff and invited Salavat Yulaev to withdraw Gareyev and play 6-on-5. The extra man helped Omark and Hartikainen set up the play behind our net before the Finn scored to mark his 400th KHL appearance and tie the game within a minute of the opening goal.

After such a fast start, the action continued to flow at both ends. Hrubec continued to produce a solid game to keep the home team at bay and our Czech goalie even collected his first KHL point when he made a quick clearance to release Cracknell in the last minute of the frame. Cracknell needed no second invitation, surging forward before firing in a shot from the boards that Gareyev could only wave into the net.

That was the end of Gareyev’s evening. There were just 13 seconds left until the intermission and the third period saw Juha Metsola take over in the Ufa net. The Finn made 10 saves in the third period to keep our offense at bay and help his team to a comeback victory. Sadly, Red Star was the architect of its own downfall, straying into the penalty box too often once again – and all too frequently for soft calls.

Salavat Yulaev had tied the game at 2-2 thanks to Nikita Soshnikov when the pressure really mounted on Hrubec. The big Czech pulled off a series of big stops to frustrate the home first line as another penalty kill came to an end. And the game was heading to overtime when a pair of soft penalties gave Ufa a 5-on-3 advantage for 90 seconds. The pressure was intense and, in the end, our defense cracked. Philip Larsen had already fired narrowly wide off a Linus Omark feed when the combination repeated itself and this time the Dane found the net. By the time the teams were back to equal strength, the Dragons had little over a minute to try to save the game and, despite finishing with a spell of 6-on-5, there wasn’t quite enough left in the tank to force overtime.