Taking on the best 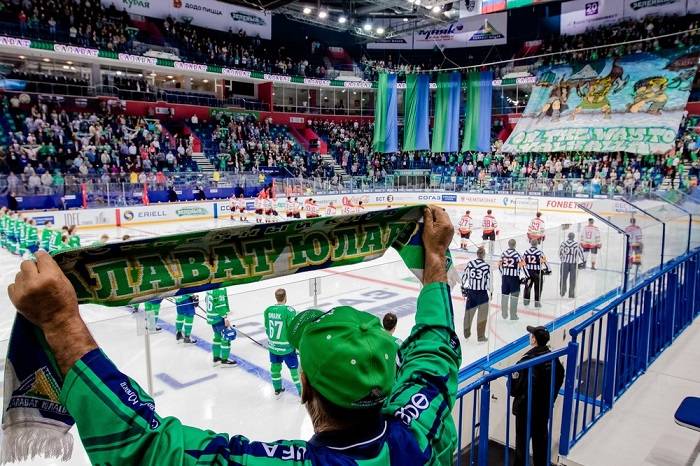 The Dragons take flight for the first time this season – and the first road trip could hardly be tougher. Our next three games take in visits to three of the top teams in the Eastern Conference last season: beaten Conference finalist Salavat Yulaev, regular season leader (and current KHL pacesetter) Avtomobilist, and defeated Gagarin Cup finalist Avangard. Now’s the time to show that reputations count for little.

Last meetings: You don’t have to look far to find them – we played Salavat Yulaev at the start of the month. Gilbert Brule had three assists and a shoot-out winner in our season opener in Shenzhen on Sep. 3, while Wojtek Wolski scored twice to reach 100 career KHL goals. The following day, though, Salavat got revenge in a 2-0 win.

Background: It seems like we only just met – probably because our first two games of the season saw us take on Salavat Yulaev at home. The back-to-back games in Shenzhen brought a first shoot-out win in two years against last season’s Eastern Conference finalist. Since then, Nikolai Tsulygin’s team has enjoyed wins against Sibir and Amur but lost at home to Avtomobilist, continuing a start to the season that rather resembles our own in the way wins and losses have alternated.

Gilbert Brule is available again after suspension. Historically, he’s done well against this opponent with 5 (2+3) points against Ufa as a Red Star player. And, of course, he got our shoot-out winner in the opening game. Salavat Yulaev forward Teemu Hartikainen is poised to make his 400th appearance in Tuesday’s game and the Dragons will need to be alert to ensure he doesn’t add to his impressive tally of six goals against us so far. Nikita Soshnikov, leading scorer for his team this season, is another dangerman. He has 6 (4+2) points this season after returning to Russia.

Last season: Red Star allowed five goals in both its games against Avtomobilist last season, but a 2-5 loss during the Motormen’s winning start to the campaign was closer than the scoreline suggests. The Dragons led twice in Shanghai but the visitor proved too strong in the third period and added late goals to give the final score a flattering look. It was a similar story on the road in December, where Red Star jumped to a 2-0 lead and tied the game at 3-3 late in the third period before Avto sneaked the verdict in the last five minutes.

Background: There’s a tough game in the offing on Thursday as the Dragons go to an Avtomobilist team that has made a flying start to the season. At the time of writing, Andrei Martemyanov’s men have six wins from six games and could be on course to beat the 18-game winning streak at the beginning of last season. That start has come without any contribution from Pavel Datsyuk, whose return to his native Yekaterinburg has been hampered by injuries thus far, nor from Anatoly Golyshev, also unfit at present.

Men to watch include perennial goal threat Nigel Dawes and summer signing Brooks Macek. The latter, a German international who won Olympic silver in PyeongChang, has 7 (3+4) points from his first six games in the KHL.

Last season: January 28 saw a little bit of history made for Red Star – for the first time ever, we managed to beat Avangard. And we did it in some style, too, taking a 3-0 lead in the first half of the game and collecting a 5-2 verdict. Our big players that day, Veli-Matti Savinainen and Drew Shore, have both moved on since then, but it’s worth noting that Ilya Mikheyev, a regular tormentor of our defense during a run of seven straight losses against Avangard, has also left the KHL.

Familiar faces: Taylor Beck was Avangard’s top scorer on its run to last season’s grand final after joining the Hawks from Red Star on transfer deadline day. So far this season he has 4 (2+2) points; in 60 games for Kunlun he tallied 35 (13+22) points.

Background: The games don’t get any easier on this trip. Next up, it’s Avangard, last season’s beaten Gagarin Cup finalist. And this is a team that, famously, gets goals from all over the ice – literally, when Maxim Chudinov is in the mood to launch a dangerous effort from beyond his own blue line. At it’s best, Avangard is very impressive. The Opening Cup win at CSKA showed that the Hawks are capable of going all the way this season, and there was a good performance to follow that up with a win at Jokerit.

However, Bob Hartley’s team doesn’t always get it right. When things go wrong, they often go badly wrong: witness a shock 1-5 drubbing at home to Severstal and a 0-3 defeat at Torpedo last weekend. That means that Avangard was only one win better off than Red Star going into the third week of this season.

There’s also a little bit of ancient history between the two head coaches here: back in 2002/03, Hartley replaced Fraser as head coach of the Atlanta Thrashers.