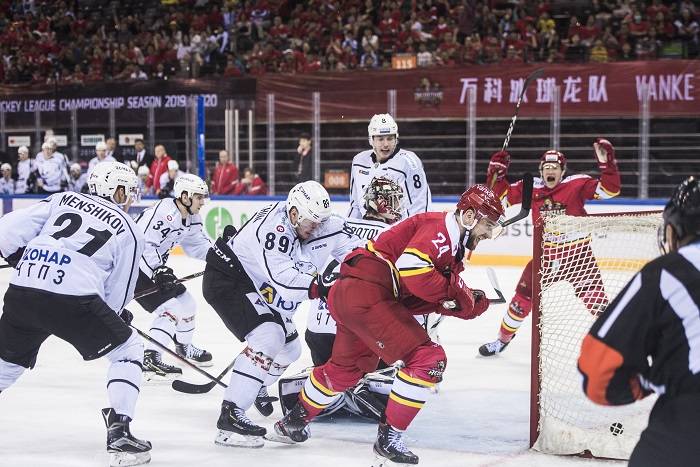 Red Star’s final game in Shenzhen brought another record crowd. On Sunday, 8,115 fans came for our second meeting with Traktor. That’s the third time in six games the club has enjoyed an attendance record here: against Barys a 6,200 crowd was the best regular-season turn-out, but a week later the bar has been raised twice more as both games against Traktor set new all-time records. Our time in Shenzhen confirms that the huge efforts to raise the profile and popularity of hockey in China are bearing fruit: such crowds would have been unimaginable not so long ago but now a new generation is getting a chance to experience the thrills of the fastest team sport on earth.

Today’s crowd saw Tyler Wong inspire a turnaround at the start of the third period to bring Red Star its third victory in six games this season. The 23-year-old joined our team over the summer after a year in the AHL in Chicago and is already proving to be a handy addition. Canadian born and of Chinese heritage, he boasts an impressive scoring record in the WHL and is showing signs of transferring that productivity to a higher level as he bids for a role in China’s Olympic team. His two points in today’s game enabled the Dragons to wipe out a one-goal deficit and edge ahead of a resilient Traktor team.

But this game was far from plain sailing, despite an impressive finale. In the first period it was often a case of making a virtue from a necessity. A string of minor penalties kept Red Star on the back foot for much of the game and forced Simon Hrubec to be at his very best between the piping. An early save from Andrei Popov was just the warm-up; bigger stops were to come as our Czech international read a neat power play combination to deny Jesse Virtanen then, late in the session, reacted sharply to stop Ilya Karpukhin after a deflection gave the defenseman a good shooting chance.

At the other end, there was little to shout about. A Wojtek Wolski breakaway saw him shoot into Ivan Fedotov’s glove but all those penalties left our game too disjointed.

That penalty trouble continued into the second period and finally took its toll. Hrubec produced yet another athletic stop, diving across his crease to deny Anton Glinkin. But fortune favored Traktor; the puck dropped onto the stick of Sergei Konkov and even our goalie could do nothing to stop him stuffing it home from close range.

Red Star might have tied the game quickly: a huge scramble in front of Fedotov’s net ended with the goal off its moorings as Adam Cracknell desperately forced the puck over the line. A long video review finally ruled in favor of the defending team.

If Traktor got the bounce in that middle session, it’s fair to say that Lady Luck had an assist when Wong tied the game at the start of the third period. A Kunlun attack had broken down and it seemed to be a straightforward play for Yury Sergiyenko to shoot the puck round the boards for Dmitry Kalinin to clear. Instead, the pass clipped the skates of referee Evgeny Romasko and popped out onto the crease for Wong to seize the opportunity. Fedotov was unaware of the danger until too late, the forward pounced for his first KHL goal.

Moments later Wong was involved again as Red Star took the lead. His hard work behind the net fashioned a shooting chance for Cory Kane and when that effort was blocked, Brandon DeFazio forced home the rebound. DeFazio, back for a second spell with the club, claimed his first of the season to add to the 15 (10+5) points he contributed in 2017/18.

The finale was tense. Ethan Werek fluffed a chance to give some breathing space when his breakaway was thwarted, then the forward found himself in the box after knocking Fedotov’s helmet off. Red Star killed that penalty and had another chance to make the game safe when Vic Bartley led a two-on-one break that ended with Fedotov clinging on to the puck. Traktor’s final surge was almost halted, but Andrew Miller fired wide of the empty net with 90 seconds left and there was still time for another save from Hrubec, holding on to a point shot from Karpukhin as Red Star held on for the win.