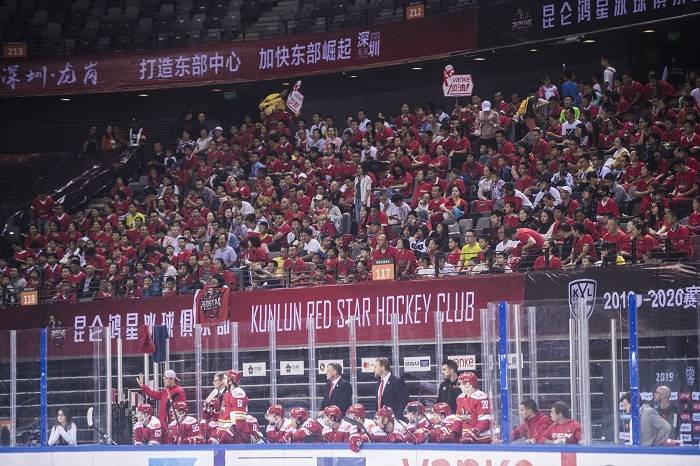 As our home stand in Shenzhen comes to an end, Kunlun Red Star is celebrating record crowds and a warm welcome in the south of China.

Choosing to start the 2019/20 season in one of the world’s fastest-growing cities was always going to be both a challenge and an opportunity. With our regular home in Beijing unavailable due to the ongoing celebrations of the 70th anniversary of the establishment of the People’s Republic of China, the club chose to take the KHL to an entirely new venue. The tropical climate of Shenzhen – now the southernmost city ever to stage pro hockey – may not have been the most obvious choice, but the decision has paid off and attracted a new audience for the team and the game.

Over the first four games at the Universiade Sports Complex, more than 16,000 fans have come to cheer on the team. That’s an average of over 4,000 per game and includes two club records. On September 8, a crowd of 6,253 saw the game against Barys, setting a record for a KRS regular season game. That record lasted less than a week, with Saturday’s match-up against Traktor bringing an all-time record of 7,716 fans to the arena.

The move also won the approval of the players. Wojtek Wolski, whose two goals in our 4-3 win over Salavat Yulaev moved him to 100 markers in his KHL career, liked what he’d seen. “It’s great, I love it. I wish we could stay here all year,” he said.

His strike partner Gilbert Brule added: “It’s nice to see that we got so many fans coming here to cheer for us, that’s been great to see.”

There were some concerns about the heat and humidity – it was up to 40C on the streets during the games against Barys, and the rainy season has arrived. But, as forward Olli Palola pointed out, in summer it’s always a challenge to get good ice, whether in Finland or China. And goalie Simon Hrubec had a simple way to adapt: “I’ve bought an umbrella,” he joked. “I want to be ready for anything!”

Hockey in Shenzhen isn’t just a one-off. The city is also home to the KRS Vanke Rays, our female affiliate, and the girls begin their season in Russia’s Women’s Hockey League this weekend. That coincides with Red Star’s games against Traktor Chelyabinsk – as well a falling on a public holiday in China – so we are hoping to see more fans for a back-to-back festival of top-class hockey action.

It’s worth noting that, from the start, Red Star has preferred not to give away large numbers of free tickets to boost attendances at the Dragons’ games. Instead, looking to attract a new audience of committed supporters, the organization has worked to reach community groups, schools and colleges and the business community in our host cities, offering group deals to raise awareness of the sport and what our teams have to offer.

The strategy is working. In Beijing, our final games of the 2018/19 season attracted encouraging crowds to the newly opened Shougang Arena, now established as Kunlun Red Star’s usual home. The games against Admiral and Barys were dead rubbers, with no hope of achieving the playoffs, yet both times we saw close to 3,000 fans come to support their team. Now, in Shenzhen, we are seeing how a new sport is gaining traction in a new city, one which grew from a fishing village into a global megapolis in a few short decades after it became a Special Economic Zone in 1990. That rapid boom gives it a unique demographic: young, educated, aspirational and eager for new experiences after relocating to a new home. Sport is a big attraction, especially after the 2011 Universiade brought a host of top-class sporting facilities including our own arena. And now hockey is making an impact here too, with both the men’s and women’s game attracting a fresh audience in a region far removed from our country’s traditional hockey strongholds around the northern city of Harbin.

This paints a very different picture from some of the Russian media coverage of our time in Shenzhen. An error in transmitting the attendance for the second game in the series led to widespread reports that only 800 people saw our 0-2 loss against Salavat Yulaev. That prompted some widespread criticism of the decision to play in Shenzhen, and even the whole KRS project. In reality, the crowd was 2,800 – admittedly the lowest of the four games played so far in Shenzhen, but hardly evidence of a failed experiment.

With two more games in the south this weekend, everyone at Red Star is looking forward to welcoming Traktor Chelyabinsk to our tropical sporting capital. And we’ve not forgotten our first home, of course. In October we’ll be heading back to Beijing for our next home stand as Curt Fraser and the team looks to build on a promising start to the season.

For Wolski, the chance to settle the team in a permanent home means a lot. “It’s nice to get to stay in one place longer than a month,” he said. “It seems like we are always moving around and that doesn’t make it easier for the team. I’m looking forward to having one place to stay, a place we can call home.”