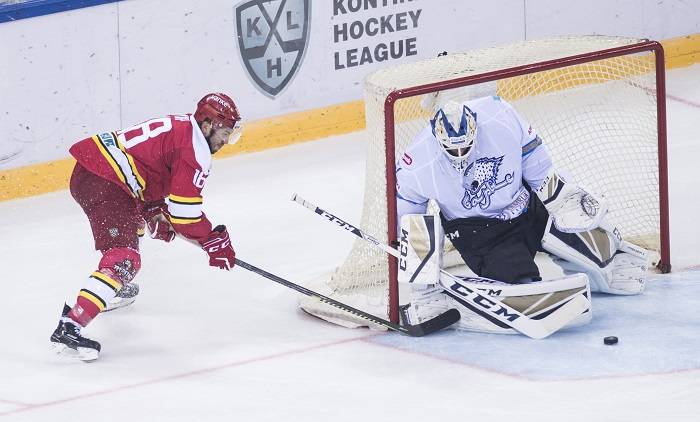 The second of our back-to-back games against Barys ended in a narrow defeat in Shenzhen. Despite a brave fightback from 0-2 to tie the scores, the Dragons lost out to a third period goal from Nikita Mikhailis.

The first period saw Red Star produce some of its strongest hockey of the season, dictating the play for long periods and leading the shot count 15-5. Wojtek Wolski might have opened the scoring after Trevor Murphy’s break, but Anton Sagadayev got back to distract him at the moment of shooting. Spencer Foo drew a good save from Henrik Karlsson after he fashioned a scoring chance by wriggling away from Maxim Semyonov in front of the Barys net. At the other end, Simon Hrubec – back in the team after sitting out yesterday’s win – faced one moment of alarm when a powerful point shot looped up off his shoulder but dropped safely.

However, the Dragons could not take their chances and were punished at the start of the second when the first penalty of the evening saw Barys score a power play goal. Defenseman Darren Dietz, one of the key players for the Kazakh team, exchanged passes with Corban Knight before shooting home from the point.

Problems kept piling up: Gilbert Brule was ejected from the game for kneeing and the subsequent major penalty brought another goal for the visitor when Adam Helewka fired home after something of a crowd scene in front of Hrubec.

However, this Red Star team is not lacking in character and duly began exploring its way back into the game. Brandon Yip, last season’s leading scorer, got his first of the current campaign to start the fightback. Tyler Wong was the architect, streaking behind the visitor’s net before putting a pass for Yip to shoot home from the slot and halve the deficit. Then came Ethan Werek, scorer of Sunday’s winning goal, to tie the scores at the end of the middle frame. Our summer signing won his battle in front of Karlsson’s net and forced the puck home after a Jake Chelios shot was redirected by Luke Lockhart. The second intermission arrived with the scores locked at 2-2 and with everything left to play for.

But after the fightback came another blow. Having dragged the game back level, Red Star was rocked when Mikhailis restored Barys’ lead. The forward pounced on a loose puck in front of Hrubec’s net after Helewka’s shot was blocked. Having done all the hard work to get back into the game, Kunlun had to do it all again.

Again, there was no shortage of effort. But, once again, there were few clear looks at Karlsson’s net. A late flurry of shots in the closing stages saw Wong and Mathew Maione look to force the game into overtime but Red Star ran out of time and slipped to a second defeat of the season.

Once again, though, there were plenty of positives to take from the game. A second goal from Werek, Yip’s first of the season and another good crowd – more than 4,000 – to see the action in Shenzhen. It’s something to build on before our next back-to-back games against Traktor at the weekend.