Next up: Barys Nur-Sultan 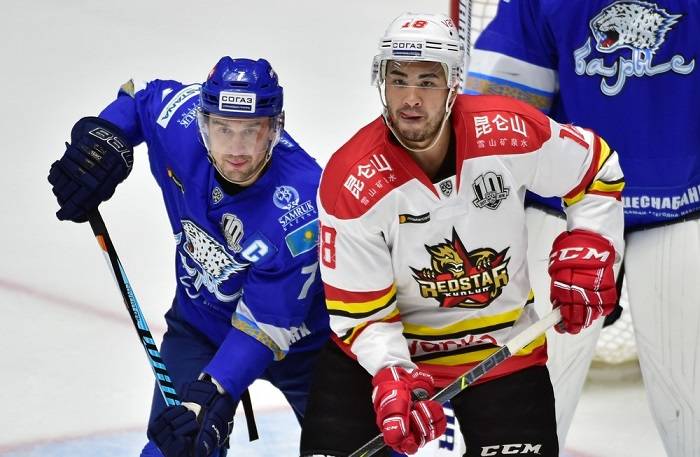 The first action of the season saw a thrilling win over Salavat Yulaev to welcome the KHL to Shenzhen. Our next opponent is another familiar rival from the Chernyshev Division, but Barys Nur-Sultan is bringing an unfamiliar line-up to China.

Last season: After a 1-4 loss at home in December we travelled to Kazakhstan in January and picked up a 3-1 victory with Brandon Yip scoring twice in Jussi Tapola’s final victory with the club. The closing days of the season saw us go down 1-3 in Astana before our final game brought Barys to Beijing where the visitor claimed a shoot-out win.

Familiar faces: Canadian defenseman Jesse Blacker was part of the Red Star roster under Mike Keenan in 2017/18. He played 49 games and had 9 (1+8) points. The 28-year-old is now beginning his second season in Kazakhstan.

Background: Astana is now called Nur-Sultan but Barys remains the sporting pride of Kazakhstan. Top of the Chernyshev Division last season, it boasts a reshaped roster of imports on the forward line following the departure of Patrice Cormier and Matt Frattin to Ak Bars. Barys will also be adapting to life without long-serving defenseman Kevin Dallman and fellow club institution Brandon Bochenski. The early signs have been mixed: summer signing Corban Knight has scored two goals in two games after leaving a two-way contract in Philadelphia, but the team suffered a surprise defeat against Admiral before struggling to get past Amur in those opening games.

Red Star’s opening games saw plenty of promise from the renewed partnership between Wojtek Wolski and Gilbert Brule. The stats show that these two Canadians caused plenty of problems for Barys during their brief union a couple of seasons ago. Between them, they were good for four goals and six assists against the Kazakhs; with that partnership available once again, we might be looking at some more strong scoring in these games.