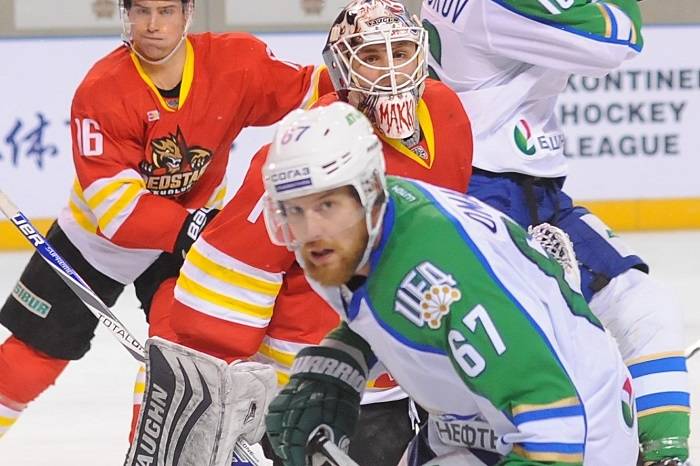 It’s a new season and a new beginning for Red Star. The opening games of the 2019/20 campaign will be played in Shenzhen, taking top level men’s hockey to Southern China for the first time. This fast-growing city has already enjoyed the exploits of KRS Vanke Rays, our women’s team, in the CWHL and now in the Russian ZhHL; this will be its first look at KHL action. And it all starts on Wednesday when Salavat Yulaev comes visiting for two back-to-back games.

Last season: In the past, we’ve had a good record against Salavat Yulaev, so December’s 0-5 loss in Ufa was a bit of a shock. January brought another high-scoring reverse, 4-7 as Jussi Tapola’s time with the club drew to a close. Curt Fraser was behind our bench for the first time as Salavat Yulaev edged a shoot-out verdict on Jan. 22 and suffered another narrow defeat to the same opposition two days later.

Familiar faces: None. If we are just talking about players. But our former Finnish strength coach Matias Sarvela is now applying his trade in Ufa.

Background: Our opening games of the season present a formidable opponent – and a great chance to assess how Red Star’s roster is equipped to take on the coming season. Salavat Yulaev got to the Eastern Conference final last season with a playoff run that answered many of the questions about young head coach Nikolai Tsulygin. Since then, though, several key players have left Ufa and center Joonas Kemppainen and forward Vladimir Tkachyov will take some replacing. For Red Star, the big worry will be stopping Linus Omark: the Swede has scored 11 (2+9) points in eight games between the teams. Teenage forward Rodion Amirov could make his KHL debut for Ufa in these games after scoring five times in pre-season.

On Kunlun’s side, there’s plenty to look forward to. Will Gilbert Brule and Wojtek Wolski rekindle their effective partnership of 2017/18? Who will get the nod as starting goalie, Simon Hrubec or Jeremy Smith? How will Andrej Sustr’s vast experience help to stabilize our defense? And which of our new forwards will be first to get among the goals? All the answers are coming soon – don’t miss it!