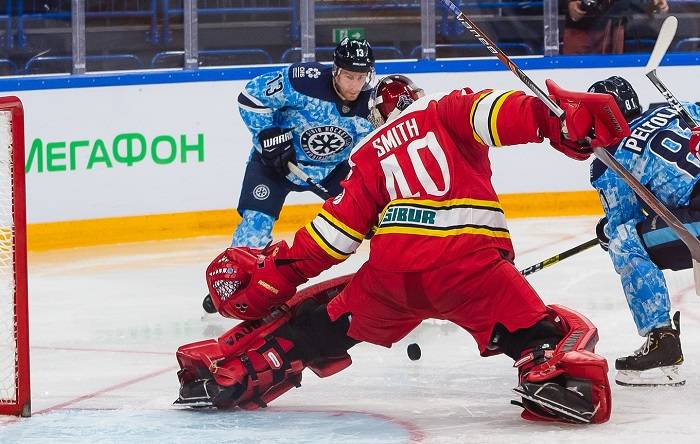 Our final game at the Romazan Memorial Cup – and our final game of a truncated pre-season – pitted Red Star against Chernyshev Division rival Sibir. Neither team was in a position to win the tournament, but after two tight games against Traktor and Metallurg, Kunlun had every reason to be satisfied with its efforts in the Southern Urals.

As a result, there were some new faces in the gameday roster. Goalie Jeremy Smith and defenseman Mathew Maione shook off their injuries in time to make their first appearances for the club. Both of them will be expected to play a key role in the coming season, and this was a valuable chance for our coaches to see them in action. But there were also some opportunities for players to stake a claim to a place in the team. On defense, we saw Brayden Jaw and Colin Joe in action, while forwards David Bondra and Rudi Ying had a chance to prove their worth. With the KHL season coming up fast, it was a big day for all of these players as Curt Fraser and his colleagues make their final decisions about who will start in the senior team.

However, it was also very much a pre-season game and, for long periods, the action on the ice reflected that. Neither team was shirking the challenge but, equally, neither was going to throw everything into this encounter when the serious business starts in barely a week. As a result, it wasn’t until midway through the game that we saw any serious goal action. First, Sibir thought it had opened the scoring when a shot from Evgeny Chesalin looped up off Smith’s shoulder and dropped behind the goalie. The on-ice officials awarded the goal, but the replay showed that the puck did not cross the line.

It was a short-lived reprieve, however. The next shift saw Sibir back on the attack and there was no question about Andrei Yermakov’s finish. A flurry of minor penalties disrupted much of the play prior to the second intermission and the third stanza continued at a moderate tempo. The action briefly hotted up when the teams traded goals in the 49th minute: Jake Chelios potted his first for Red Star; he, along with Bondra, is seeking to fill the big skates of a famous father here with the Dragons. But it wasn’t enough to prevent a 1-2 loss.

Head coach Fraser was encouraged by the availability of Maione and Smith but admitted the team made too many mistakes in the game. “We took a lot of unnecessary penalties again,” he said. “We need to watch our discipline, it’s such an important part of the game.”

Following the end of the tournament in Magnitogorsk, the teams flies on to Shenzhen where it will play the opening games of the new KHL season. The next action for us is on September 3 against Salavat Yulaev – the first engagement of our regular season campaign.