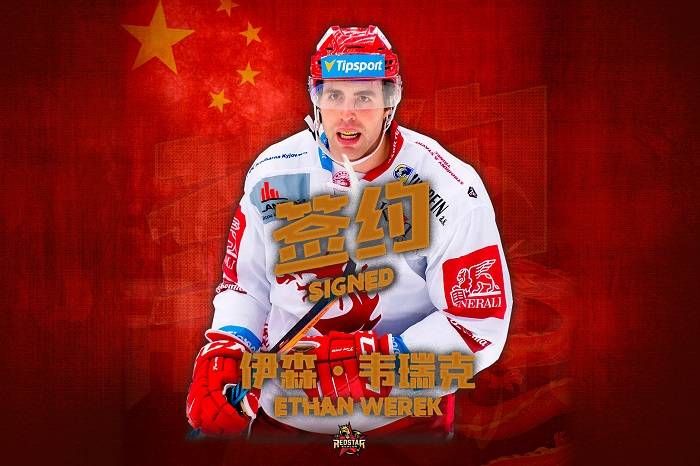 It’s a deal that’s taken almost two years to complete but – finally – Ethan Werek is our newest Dragon! The 28-year-old Canadian forward agreed a deal on Friday and joins us following a successful spell in the Czech Republic at Ocelari Trinec.

That spell with the Steelers is significant. Fans with long memories may recall how Werek was close to signing up with us two years ago. Arriving in China on a try-out contract, he didn’t quite do enough to impress Mike Keenan and went back home to Canada. While his hockey skills were never in doubt, the challenges of adapting to life outside of North America for the first time slowed the forward’s progress in our colors.

But it was all part of the learning curve. Back home, Ethan continued in the AHL for one more season, taking his career stats to 388 games for 144 (65+79) points. And after the 2017/18 season he decided once again to look overseas, heading for the Czech Republic.

Drawing on his earlier Kunlun experience, Ethan enjoyed success in Trinec. He was part of a team that won the Czech championship, contributing 24 (13+11) points in 34 regular season games and adding a further 8 (6+2) in the playoffs. Having overcome the adaptation issue, it was time once again to test himself in Eurasia’s strongest hockey league and renew his Kunlun connection.

Director of Hockey operations Scott MacPherson was excited about the new addition: “We are glad to add Ethan Werek to our group. After almost two years of recruiting him and trying to secure him to our team, we are glad to finally add this AHL experienced and trained Chinese heritage player to our roster.”

Thus, Ethan is back at KRS on a one-year, two-way contract. Potentially there’s more to come: as a player with Chinese heritage, Werek is a candidate for team China at the next Winter Olympics if he completes two seasons with Red Star.

Welcome (back) to the Dragon’s Lair, Ethan Werek!