Halted at the last 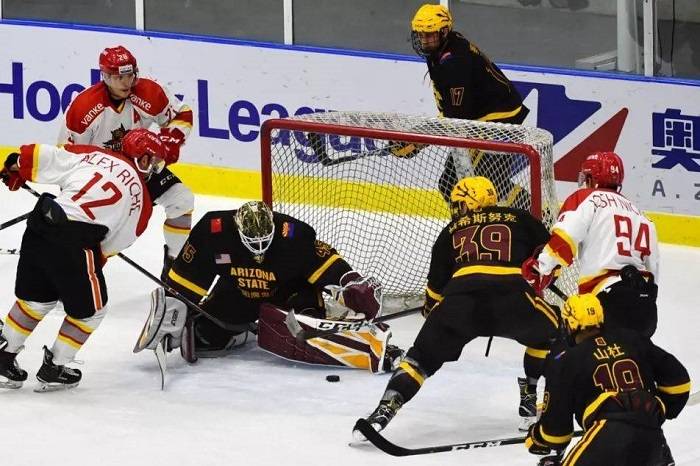 After battling into the first ever Renaissance Cup final, our KRS Select roster found the challenge of Arizona State University was a little too much. Our guests from the USA began the tournament with a victory against us and finished with another to take home the cup.

However, the take homes for KRS are also encouraging. After making the decision to use this tournament to give our Chinese and Chinese-heritage players game time, and to assess the progress of many guys hoping to stake a claim for a role in the KHL this season, our coaching staff got to see the depth we have in the Red Star system. It was a great opportunity to understand not only what we have, but what we still need. And, with a team thrown together at short notice, we still claimed a runner-up spot against more established opposition.

It’s worth noting, for example, that our opponent from Arizona boasted players with serious junior experience in North America. Johnny Walker, who scored a hat-trick in the final and had seven goals from five games in China, is a USHL champion from his time with Chicago Steel; goalie Max Prawdzik, who got great reviews for his performances here, helped Boston to win the NCAA East a couple of years back. Indeed, a first-hand view of the strength of NCAA hockey vindicates the decision to recruit heavily from the college system over the summer: additions like Alex Riche, Jason Fram and Spencer Foo have all learned the game via spells in collegiate sport and are now ready to graduate to a higher level.

There are also encouraging signs about our farm club’s ability to compete in the VHL. It’s been a summer of change, with our previous KRS-ORG set-up going it alone while we set up a new team competing at a level just below the KHL. Many of those players were involved in the Renaissance Cup and wins against regular playoff contenders like Tseng Tou Jilin and Yermak Angarsk suggest that they are ready to mix it at that level.