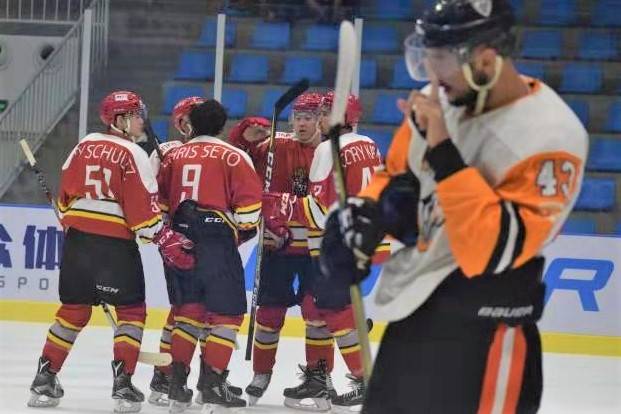 The group phase of first ever pre-season tournament in China came to an end – and tomorrow’s final will bring a repeat of our first game of the tournament. Last week, our KRS Select roster began with a loss against Arizona State University, the first of three victories for the Americans on their tour to China. After that, though, dragons recovered to reel off three successive wins of its own, completing the sequence with today’s success against Yermak. That means we finish top of the group table, level on points with the students, and will play for the Renaissance Cup on Wednesday.

That revenge mission was set up by a 3-1 victory against the Russian team. Once again, the roster was drawn from Chinese and Chinese heritage players on two-way contracts but there was one notable addition. Cory Kane, injured for so much of last season, made a welcome return to action and was quickly among the points. Just five minutes into the game Cory picked up an assist as Chris Seto opened the scoring.

The game was won in the first period. In the 10th minute, Ty Schultz – whose grandmother Zheng Fengrong was the first female Chinese world record holder when she jumped 1.77m in the high jump back in 1975 – fired home what proved to be the winning goal. Yermak pulled one back in the second period but could do nothing more. As the final hooter approached, Mikael Tam sealed the win.

And so we prepare for another meeting against Arizona State. However, the preparations will not involve the bulk of our KHL players. The day after tomorrow our senior players are heading to the Urals ahead of two further tournaments in Chelyabinsk and Magnitogorsk.