A chance to recall Alaska 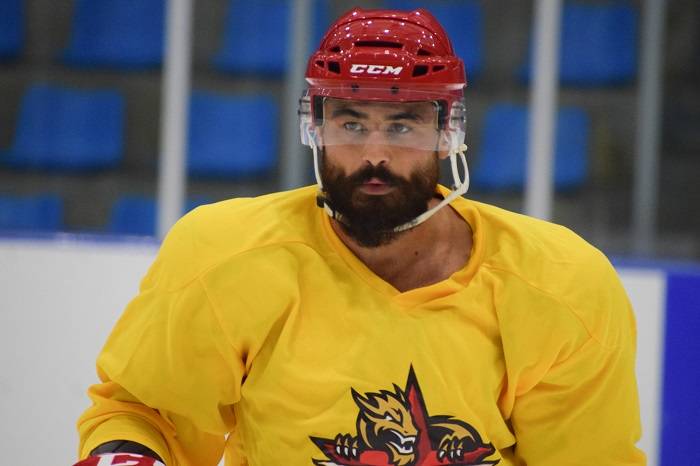 Kunlun Red Star is overhauling its roster ahead of the new season with head coach Curt Fraser looking to build on the foundations he established after joining late in the previous campaign. As the Chinese club began its summer camp in Beijing, KHL.ru caught up with Garet Hunt to talk about his move to China. The former ECHL enforcer is looking forward to catching up with old friends – and admitted he asked the advice of a few old foes as well.

Garet, welcome to Beijing. How do you see this new stage of your career?

I’m excited for the opportunity I’ve got here with Kunlun Red Star. Obviously, I’m a little nervous coming overseas. I’ve been in North America for 11 years this is a new chapter in my life coming over here, a new experience.

How did it happen?

I have some Chinese heritage and I got connected with the team here. I came over for the summer camp after my playoffs, things worked out and now I’m here.

It was an easy decision to make because I was really excited to take a new step in my career and come overseas. At the same time, it was a big decision for me and my family to leave everything I had in North America, but I’m happy so far and I’m really excited.

Did you know much about the KHL before you signed up?

I didn’t really know a whole lot about the KHL or Kunlun. I just followed the guys that I knew and grew up with like Gilbert [Brule], I played with him growing up when we were really little and we played juniors together. Also guys like [Brandon] Yip, Victor [Bartley], I grew up with them, Brandon and I are from the same home town. I followed the guys that I played with, guys that I like to watch and moved overseas but I didn’t know a whole lot about the league in general. Right now I’m just figuring it all out.

Did they tell you much about moving here?

Vic was huge, I talked to him a couple of times and Brandon. They just let me know what I was in for over here when I came over in the summer, they told me what was at stake and what kind of opportunity I had here. That made really excited and I came over here, I came and did the best that I could and got a contract

Have you had much chance to talk about your role on the team yet? In the past you’ve been known as an enforcer, will you be doing that here?

I’m definitely just willing to do whatever they ask of me. Obviously, I’m trying to keep the games in check and stick up for my team-mates. I want to bring a hard-work ethic, a willingness to compete. I’ll do anything just to be out there and contribute with whatever ice I get. It’s just about making the best of it, trying to be physical and hopefully contributing on the penalty kill.

When I look you up on YouTube, I found clips of you fighting guys like Trevor Gillies, Joe Mirasti, Josh Gratton. All of them played in the KHL with Vityaz before you came up against them. Did they have anything to tell you about their time here?

Yeah, Trevor is a really nice guy, I talked to him and he said they had a good experience over here. They all had nothing but good things to say about the KHL and that made the decision even easier. It’s pretty funny, all those guys I used to fight with came, and now I’m here.

We don’t have teams like Vityaz anymore, with a roster stacked with fighters, but of course it remains part of the game.

Yeah, I know a little bit about it!

Given everything that’s at stake with the chance of getting to the Olympics, is this the biggest challenge of your career so far?

It could be. I’m really, really excited about the opportunity that Scotty MacPherson and Curt Fraser have given me here. I’m coming over here to try to be physical, protect my team-mates. Just to have that willingness. With this opportunity, I’m just going to keep working hard every day and do whatever it takes to be part of taking this organization forward. Sometimes it means mixing it up with those kind of guys, that’s just part of my game if it comes to that. It’s not that I’m out there just trying to fight everybody but I’m willing to do whatever it takes, that’s part of my style of hockey.

It’s early days, but how does the team look to you?

This team looks really solid, there’s a good core group of guys. We’ve got Yip coming back, Adam Cracknell, lots of guys who’ve played a lot of games in the NHL and have a lot of good North American experience. Also there’s lots of guys who’ve played overseas, who that experience of playing over here. Its just a great group so far, they’ve really taken me in, they’re easy-going, really easy to get along with.

And how about adapting to the bigger ice?

I played two years in Alaska in the ECHL and we had Olympic size ice up there. I’m familiar with it but I didn’t play a whole lot on it, just a little bit.

This season we are seeing some rinks becoming smaller, many clubs will have different surfaces. Will it affect the way you play if you have to switch all the time?

You’ll have to adjust. For me specifically, I’ll have to adjust my game playing on a big surface of ice. Just getting around, making contact with people on the forecheck, all that’s obviously a bit tougher on the big ice. Then all of a sudden you go back to the small ice and it’s claustrophobic, you feel like you’re running into the boards all the time. Like I said, in Alaska we played on the big ice and all our road games were small. We’d go from playing three games at home and practising on the Olympic ice then switching and playing NHL size. You adapt, our team has that adaptability. We have a lot of North American style players and guys that have been overseas, that have played on different surfaces over their careers, I think we’ll be OK with it.

After playing in Alaska, I guess you also got pretty used to lots of travel?

I’m pretty easy-going with travel. I grew up in the WHL and we were on a bus for two days traveling out east. I guess it is part of my culture, it just comes with the territory of wanting to be a professional athlete, especially in a sport like hockey. And especially when you’re in China and you’re the only team in China! I just try to keep an open mind and make the best of it. When we fly together, it’s a good opportunity to get to know the guys better, so I’m kinda looking forward to that. It can’t be any worse than sitting on a bus for 12-14 hours!

What about everyday life in China?

I’m familiar with some of the Chinese food but when I come down for breakfast and they have noodles and rice, little things like that kinda open your eyes. It’s broadening my horizons, becoming more well-travelled. I travelled everywhere in North America, it feels like I’ve been to pretty much every town, big or small. Then I come over here and its humbling. There are so many people, so many ways to get around, subway, scooters, cars, it’s exciting trying to figure it all out. It’s a new experience. All the guys are really helpful, trying to help us newbies get around and show us the ways. Excited to go to Shenzhen to start the season, the rink looks beautiful there. I’m excited to go to Russia, never been there. My eyes are wide open and I’m looking forward to it.

Do you have a hit list of places you want to see on your travels here?

I haven’t made a list because there’s just too much stuff to do. I’m just taking it all in and flying by the seat of my pants right now. Its tough at the moment with camp, we’re getting home late in the evenings. I’m just doing my thing, there’s no real list. Once I’m settled in, I’ll start thinking some things out that I want to do. I went to the Great Wall already, that was exciting and that was definitely something on my list.