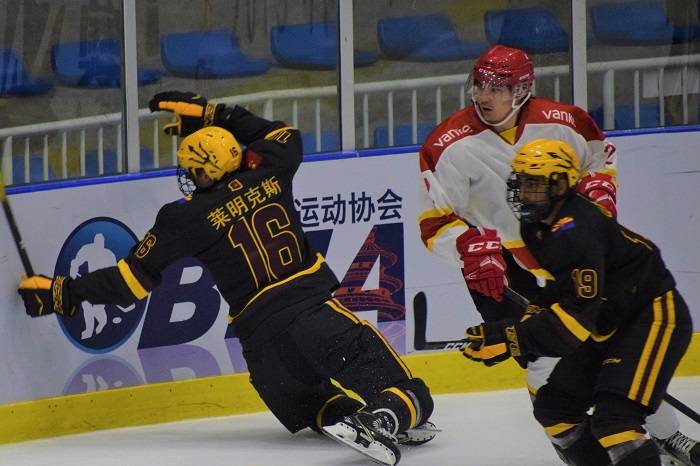 Dragons began their pre-season campaign by naming a select roster to face Arizona State University in the opening game of the Renaissance Cup. This new summer tournament, played in Beijing, pits our Dragons against two Chinese teams from the VHL, plus Russia’s Yermak Angarsk and the touring American college team.

To mark the occasion, the team was built around players from our VHL team, augmented by a sprinkling of guys with KHL experience and a few youngsters from the MHL. This was very much a KRS Select, representing the full extent of the organization. More importantly, almost every player was Chinese, or Chinese heritage, and could potentially represent the country at the Beijing Olympics in 2022. The only exception to that was Slovak forward David Bondra, currently on a try-out contract here.

Summer signing Garet Hunt was captain for the day as he made his first appearance in our colors. “It was a pretty cool atmosphere,” he said. “It was pretty cool to pull on the jersey and come out with our heritage players here in Beijing. I thought this was a good foot forward for China.”

Not surprisingly it took a little while for an unfamiliar line-up to gel. The early stages of the game saw our American visitors – including freshman Peter Zheng, a familiar face from the junior hockey set-up in Beijing in years gone by – open a 2-0 lead. The Sun Devils were taking the trip seriously, even going so far as to print up special team jerseys with the player names in Chinese characters, as well as limited edition helmets with the Arizona State name in Chinese.

However, as our guys grew in confidence and began to understand more of what was required of them, the game became more competitive. By the end of the second period, the scores were locked at 2-2 thanks to goals from Brayden Jaw and Brandon Magee. It wasn’t quite enough to spark a come-back win: Arizona moved in front once again in the third period and not even a Rudi Ying goal could peg the visitor back. Three big saves in the final minute from visiting goalie Max Prawdzik secured a 5-3 win for the Americans but there were plenty of positives for Fraser and his coaching staff to take from the afternoon’s work.

“We came into this with a bunch of age groups, a bunch of guys from different teams and we were up against a good team from Arizona,” Hunt added. “They have a good program, they are Division 1 in the NCAA and they played really well tonight.

“But we did well as a team, we just had a couple of breakdowns and they capitalized on that for some of their goals.”