Captain, leader – and back in Beijing 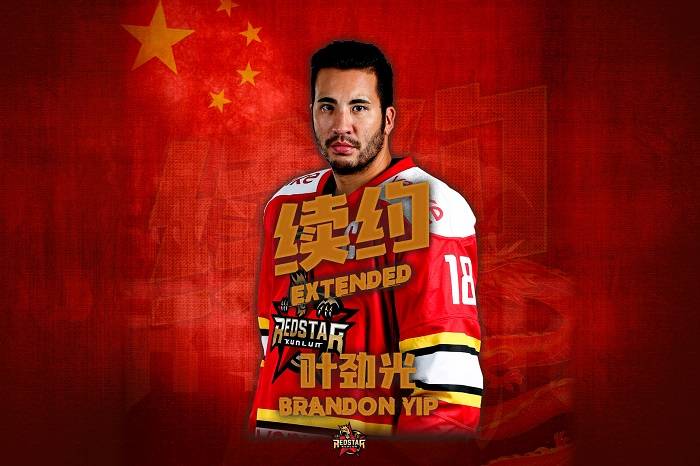 It’s not always the new arrivals that are the biggest signings of the summer. For Red Star, confirmation that Brandon Yip will be returning is one of the most important bits off business in the close season. Our captain and top scorer last season, Yip is a key player for the club – and his role in developing his team-mates is equally important to us.

In his summing up of last season, head coach Curt Fraser was full of praise for Yip’s contribution. The raw numbers, 36 (21+15) points in 62 games, only tell part of the story – even if those 21 goals represent a new club record. Instead, following two end-of-season games that saw Red Star ice unprecedented numbers of local and Chinese heritage players, Fraser talked up the way Yip, and others, helped to create the right environment to fast-track talent and potential and turn it into KHL-class hockey players.

Yip himself, of course, is a Chinese heritage player: born in Canada to third generation Chinese migrants, he grew up with a hockey stick in one hand and a firm grasp of the traditions of his ancestral land. Now, with two seasons already under his belt with us, he’s close to being available to play for team China and has already taken part in a few camps with the national team. Speaking to IIHF.com after last season, the 33-year-old admitted: “When the time comes for me to be part of the national team, it’s going to be pretty special.”

And he’s also looking forward to something special in Beijing this season, excited by the increasingly Chinese look to the team and the bright finish to the 2018/19 campaign in front of sell-out crowds at the Shougang Arena. “It means a lot to our fans,” he added. “They see people of their own background playing the game at such a high level and hopefully that helps people to believe in what we’re doing.”

Ahead of any new season, belief is never in short supply. It’s a time for optimism and targets for success. Confirming the return of one of Red Star’s true leaders simply fuels that feeling: together, we can make this our year.