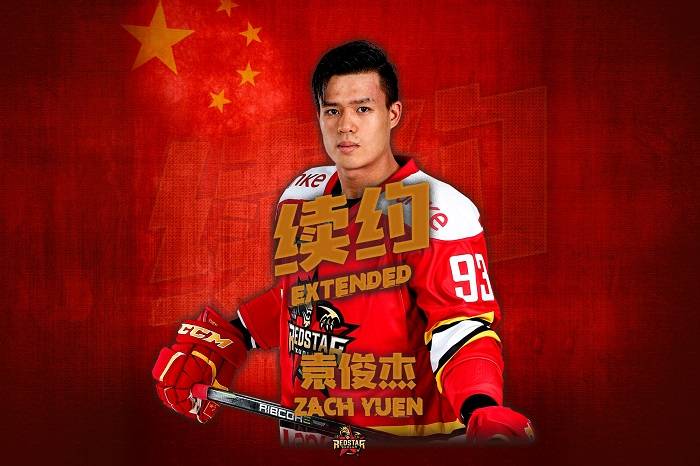 It took some time, but Zach Yuen has agreed a deal to return to Kunlun Red Star for the coming season. The versatile 26-year-old is one of the brightest potential talents on offer to the Chinese national program – and keeping him within the Red Star set-up is crucial to both his own prospects and those of the team.

Throughout his time with the organization, Zach has played a range of roles. On the ice, he has been willing to show up as a forward or a defenseman, depending on the team’s needs. He’s also found himself spending one season bouncing between the KHL and the VHL, partly as a consequence of struggling to identify a clear role for himself. That was a point that head coach Curt Fraser was keen to address when assessing the prospects for Red Star’s Chinese-eligible players: to get the best out of Yuen, he and the club need to focus together on giving him a defined role at one or other end of the ice and working to turn that undoubted potential into a player of proven quality.

Meanwhile, Zach also plays a unique role as a hockey ambassador in China. Vancouver-born, but close to his Chinese heritage, he holds a few special records: first Chinese player to score a point in the KHL, first to score a goal (and a game-winner to boot), first to score in the playoffs. In the club’s first season he was an ever-present in the line-up, delivering a career-high 12 (4+8) points across 65 games. He also became very much the go-to guy for the media as the incredible story of Chinese hockey’s rapid rise attracted international interest.