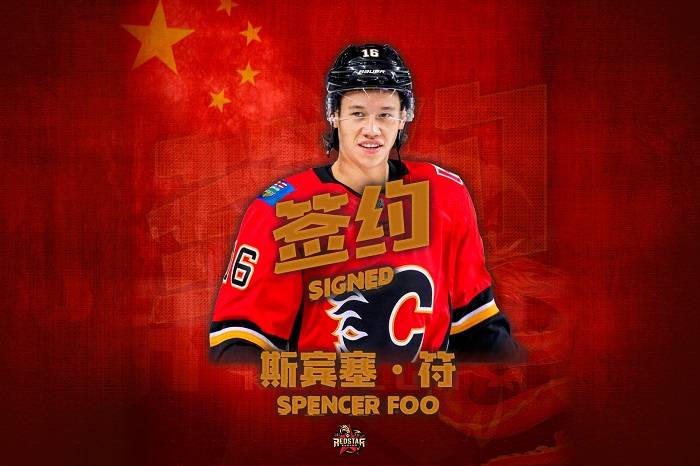 Another star of the US college circuit is on his way to China. Spencer Foo, a Hobey Baker nominee in 2017 has inked a two-year deal with Kunlun Red Star.

The 25-year-old right winger joins from the Calgary Flames organization, which won a bidding war for the college prospect after his break-out season at the ECAC’s Union College in 2016/17. Thunderous scoring in that breakout campaign saw him post a blistering 62 (26+36) points in 38 games, was finalist in the NCAA top collegiate player of the year award and alerted a handful of NHL teams to the talent of an undrafted prospect. Calgary won the race to sign the Edmonton native, beating out his hometown Oilers among others, and Foo went on to score a goal in every other game in his NHL career.

The problem, though, was that he only got a tantalizing glimpse of NHL nirvana: in total Foo played just four times in the big league, collecting two goals. The bulk of those past two seasons were spent with Stockton Heat in the AHL. There, he compiled 77 (37+40) points in 129 appearances and wore the ‘A’ in his second season with the organization. Several commentators in North America believe there is a potential NHL player in there, but the Flames’ management saw things differently and Foo’s opportunities were restricted as his contract came to an end.

So why swap Canada for China? Spencer’s surname offers a big clue. As a North American player with Chinese heritage, he could potentially be available to go to the Olympics in 2022. Once again, Red Star’s unique position as a KHL team and a development camp for the Chinese national team helps us to secure a talented player with a point to prove. Welcome to the Dragons’ Lair, Spencer Foo!