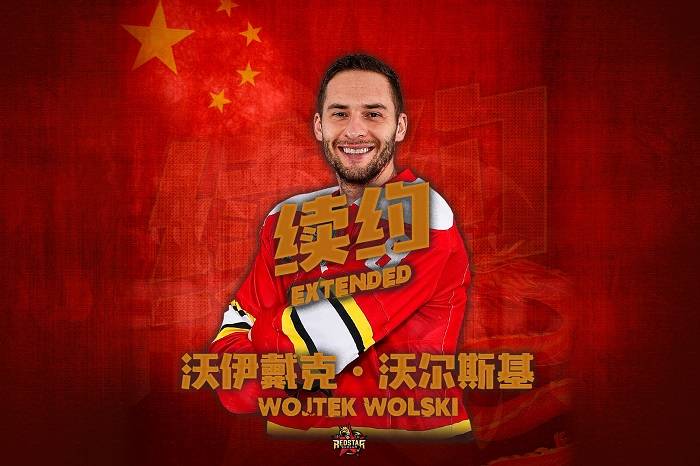 Wojtek Wolski is clearly enjoying life in China. Why else would the 2016 Gagarin Cup winner and 2018 Olympic bronze medallist extend his stay with Kunlun Red Star. This is already his second spell with the club and he’s just signed a revised contract that will keep him here for two more seasons.

Wolski first came to our club in the summer of 2017, following head coach Mike Keenan, with whom he had worked in Magnitogorsk. His first half-season in the Dragons’ lair was fruitful: 28 (7+21) points in 32 games. However, with the team struggling to make the playoffs, the Canadian forward went back to Metallurg to help with the Gagarin Cup campaign.

That was supposed to be a long-term deal, but the incoming coaching staff at Magnitka had other ideas and, unexpectedly, Wolski became available. Alerted to the possibility of acquiring a talented player who already knew our club, Red Star moved to bring him back to the Orient, initially on a two-year term. Sadly, the injury crisis that halted our progress also afflicted Wolski: he played just 26 games with 13 (5+8) points.

Naturally, everyone had hoped for better: we all know what a fully fit Wolski can do in the KHL. The man himself agreed and rather than waiting for his original contract to run down, opted to commit himself to a new, two-year deal. As a result, the 33-year-old is now set to stay with Red Star until the end of the 2020/21 campaign.

Long experience shows that sport is impossible to predict. Nobody can say what challenges or opportunities are waiting around the corner for any player. But we can certainly hope that those crises of injury or lost of form are firmly in the past and the coming two campaigns will see Wolski continue to add to his account of games and points in the KHL. At present, Wolski has 58 appearances for Red Star, compared with 118 for Torpedo and 129 for Magnitka. With two more seasons to come, though, it would be no surprise to see all that change dramatically.

There’s also plenty of scope for Wolski to write himself into the Dragons’ lore. At present just four players have made 100 appearances for the club: Joonas Jarvinen, Zak Yuen, Brandon Yip and Alexei Ponikarovsky. Wolski could easily be the fifth on that list.

As for scoring, Wolski’s 41 points place him fourth in the club’s all-time ranking. A single point will tie him with Chad Rau and Sean Collins, while he is 13 behind Yip. His 12 goals place him eighth among our goalscorers, but three of those ahead of him – Rau (21), Collins (15) and Taylor Beck (13) – are no longer part of the club. The race behind Yip, an outright leader with 30 goals in his two seasons to date, features four men: Olli Palola (19), Gilbert Brule (17), Cory Kane (16) and Wolski himself.

And let’s not forget the instant impact Wolski and Brule had when paired together during the 2017/18 season. Despite playing fewer than three months on the same line, Gilbert scored six goals off assists from Wolski, while Wolski potted four off helpers from Gilbert. In addition, they combined to create a further five goals for their team-mates. Recreating that profitable pairing can only add to the optimism around the club as we start to prepare for the coming campaign.