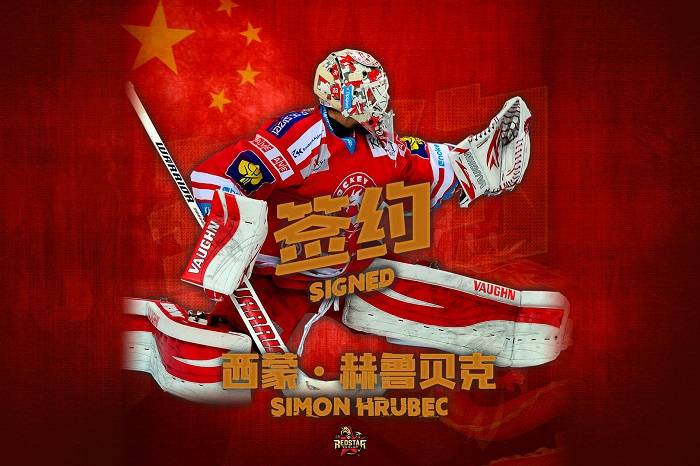 Czech international Simon Hrubec is the latest arrival for Kunlun Red Star – and he’s looking to establish himself as our goalie for the coming season. The 27-year-old is coming off a great season. In his homeland he helped Ocelari Trinec win the Extraliga title and was named playoff MVP along the way. That success brought him to the attention of the national team and he played twice in the recent World Championship in Bratislava, including a brave performance in the bronze medal game as the Czechs took a powerful Russian team all the way to a shoot-out before missing out on their first medals since 2012.

That wasn’t the first time Hrubec had impressed on an international stage. In 2017/18 he played Champions Hockey League with Trinec and earned the tournament MVP award for his efforts. In 10 games he stopped 96.2% of the shots he faced for a fantastic GAA of just 1.06. That form helped the unfancied Czech team get to the semi-final before bowing out in a shoot-out against eventual winner JYP of Finland. In that campaign, Hrubec also played on the same team as former Red Star forward Tomas Marcinko. Another ex-Dragon, defenseman Tomas Kundratek, also had a brief spell in Trinec last season after leaving China.

There’s no doubting Hrubec’s goaltending pedigree – that Czech MVP award puts him alongside the likes of Dominik Hasek and current Colorado Avalanche prospect Pavel Francouz. There’s also no doubting that Kunlun is a place where goalies flourish – remember the progress that Magnus Hellberg made in his year with the club. So hopefully this combination will be another memorable pairing as Red Star’s management continues to gather a roster of players with high-level experience on their resumes.