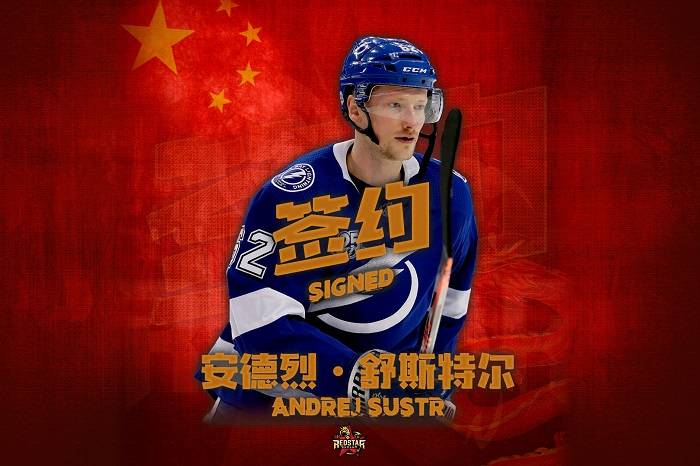 Czech international Andrej Sustr promises to be a fine addition to Red Star’s defense. The 28-year-old Plzen native brings a wealth of NHL experience to the team. He played 324 regular season games for 60 (10+50) points and added a further 46 playoff appearances, the bulk of which came as he helped the Lightning to the 2015 Stanley Cup final. He certainly made his presence felt, standing 200 cm tall and weighing in at 100 kg he’s one of the biggest players to come to China. And that intimidating physique certainly helps to keep opposing forwards locked down, although he also contributes offensively – a career-high 21 points in 2015/16 proved he’s more than just a big hitter.

At that peak of his NHL career, Sustr was viewed as a key piece of the defense in Tampa Bay and also earned a call-up to the Czech team at the World Cup of Hockey in 2016, where he played three games. However, a trade to Anaheim at the start of last season disrupted his progress and he spent the bulk of the campaign in the AHL with San Diego Gulls where he was joined by another KRS arrival, Trevor Murphy. The Ducks’ inability to fit Sustr into their system could turn to Red Star’s advantage as he seeks a new challenge and leaves North America for the first time since he suited up for Plzen’s U20s back in 2009. Not that there’s any need to fear problems adapting to a new environment – Sustr has always been ready to step into the unknown. As a 17-year-old he swapped Plzen for Alaska in search of a higher level of hockey and that spirit of adventure has helped him climb to the pinnacle of the game.