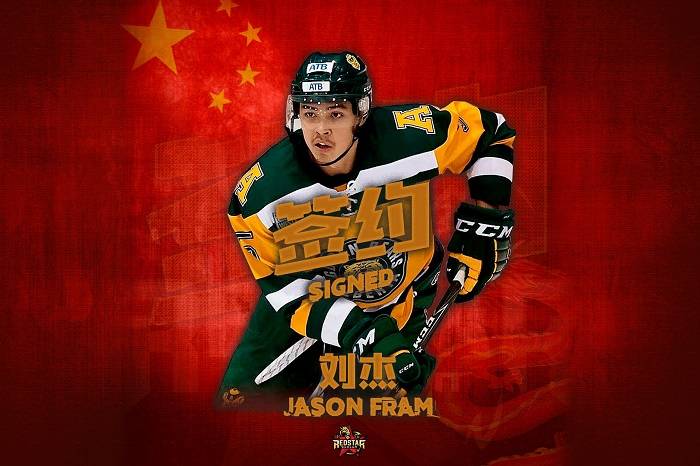 Jason Fram is our second summer recruit from the North American college circuit. The 24-year-old, an arts graduate from the University of Alberta, has earned rave reviews during his college years. So much so, indeed, that he was named the U Sports D-man of the year in 2018. That season he helped the Golden Bears to top spot in the regular season with 23 (9+14) points in 28 games and a +25 rating that was the best in Canada West and third best nationwide. Alberta also won the University Cup. The following year he improved on that output with 30 (9+21) points in 28 games, reinforcing his claims for a pro career. Now, with a two-year, two-way contract at Kunlun Red Star, that chance has very much arrived.

College coach Serge Lajoie is in no doubt of his young charge’s qualities. “Jason has become a very well-rounded defenseman who plays in every key situation for us,” Lajoie said when Fram received his player of the year award. “He has excellent poise with the puck and his decisions on transition are high level.”

Fram’s production was evident in his junior days. His time with the Spokane Chiefs in the WHL saw him scoring freely. His best season, 2014/15, saw him with more assists than any other defenseman in the league. He finished the campaign with 62 (9+53) points from 70 regular season games and went on to captain the side in the following season.

There’s another important factor that makes the Vancover native a valuable piece of the Red Star jigsaw: like our other college recruit, Alex Riche, he has Chinese heritage and would potentially be eligible to play for China at the 2022 Beijing Winter Olympics.