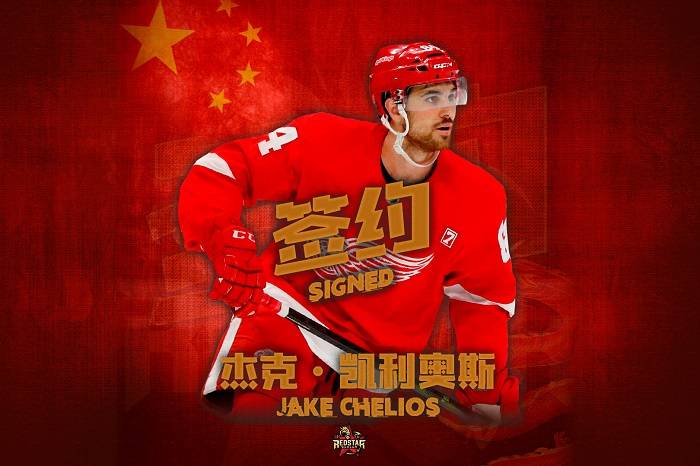 American defenseman Jake Chelios is the latest arrival at Red Star. The 28-year-old brings a famous surname – but boasts plenty of hockey credentials in his own right. Last season he made his NHL debut with the Red Wings, playing five times in the big league, but the bulk of his pro career has played out in the AHL with the Chicago Wolves, Charlotte Checkers and Grand Rapids Griffins.

His move to Kunlun is the first time Chelios has played outside of North America, but his has the tools to adapt well to a new style of hockey. Since his college days with University of Michigan, he’s been noted as a smooth-skating defenseman, comfortable with the puck and able to create plays as well as disrupt the opposition. At 188 cm and 84 kg, he owns the kind of mobile physique that should help him adjust to playing on the bigger ice. It all adds up to the kind of package ideally suited to patrolling the blue lines of the KHL.

Jake comes from some serious hockey pedigree. Father Chris won three Stanley Cups (1986 with Montreal, 2002 and 2008 in Detroit) and captained Team USA to Olympic silver at Salt Lake City in 2002. He also won the World Cup with the Americans in 1996 and played an impressive 1,651 regular season NHL games with a further 266 playoff outings.