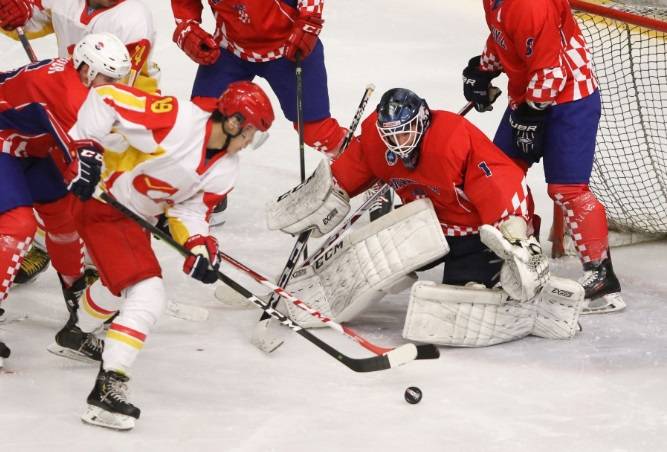 The mark of a champion is winning when all the pressure is on you. Salvaging game six of a series when your team is down 2-3 and facing elimination. Holding your nerve in the gold medal game and claiming the big prize. But sometimes character is forged in less elevated – but often far more challenging – circumstances.

And so it proved for team China in its latest World Championship campaign. High hopes of collecting a medal in Belgrade were quickly replaced with a grim battle for survival in Division IIA of the IIHF championship structure. Four games brought four losses – tight against Spain, chaotic against Croatia, then hard to bear as both Serbia and Australia came from behind to snatch the points from our Dragons in the closing seconds. It all led to a do-or-die showdown in China’s last game of the competition: beat Belgium, and survive; lose, and face demotion.

There’s one big difference, of course, between a team holding its nerve deep into a knock-out competition and a roster digging deep to raise its game and grab its last chance. The medal contender, usually, will have enjoyed the confidence boost of some victories along the way. It can call on that memory of doing the right things and getting the rewards. For Juha Nurminen and his China roster, even when the game plan started to go the right way, events conspired to rob the team of the results it deserved. Witness that Serbia game: 5-2 up at the second intermission, 5-4 up with two minutes to play yet beaten 6-5 in heart-breaking fashion.

So when the last chance arrived, it was a psychological challenge as well as a sporting one – and China rose to the occasion magnificently. A 4-0 victory, with two goals from Red Star’s Zhang Zesen and another from Rudi Ying, backstopped by Sun Zehao’s 34 saves turned the tournament around and saved China’s status.

Among the Red Star contingent at this tournament, Zhang Zesen contributed 4 (3+1) points in his five games to lead the team in scoring. Defenseman Yang Mingxi of Qiqihar also had 4 (2+2) points. Rudi Ying had a goal and two assists and there were goals from Huang Qianyi and Zhang Hao. Hu Tiangyu and Zhang Pengfei chipped in with a few helpers from the blue line. Sun Zehao produced some more impressive goaltending displays, stopping 92.13% of the 127 shots he faced in an often difficult tournament.

At the other end of the table, Serbia came out on top by the narrowest of margins. A shoot-out victory over Spain in the final game moved the host nation level on 11 points with neighbor Croatia. The head-to-head verdict went Serbia’s way, but only a tying goal in the last minute of regulation saved the home team from missing out on promotion to next season’s Division IB.

For China, despite a performance that fell some way short of our hopes, the good news is that this team has had its character and resilience tested to the limit – and, when it really counted, the players came up with the goods and stayed in the division.