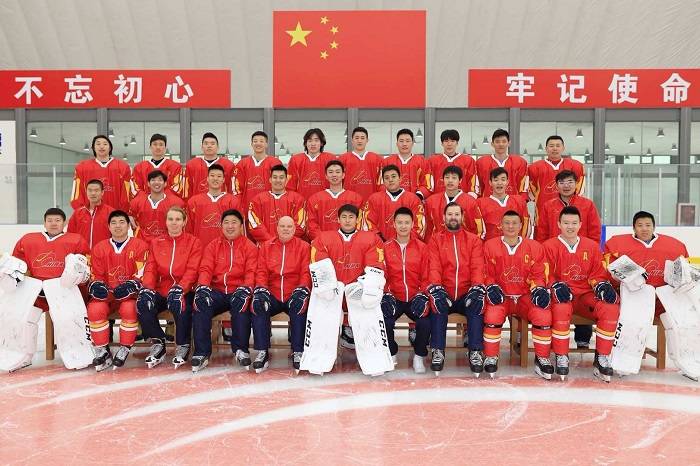 Kunlun Red Star has eight representatives in China’s roster at this week’s IIHF World Championship Division IIA in Belgrade. Barely a week after our U18s claimed silver medals in the Serbian capital, the senior team is looking to secure promotion to Division One for the first time since 2007.

The bulk of the Red Star contingent on Juha Nurminen’s roster is more familiar with life in the VHL, but three of his team have tasted KHL action this season. Goalie Sun Zehao made history as the first Chinese-born goalie to feature in the competition, making two appearances as a backup towards the end of the current campaign. His performances, and especially his attitude in training, mark him out as one for the future.

In addition, there’s Rudi Ying, a young Beijing-born forward who became the first Chinese-born goalscorer in the KHL when he notched against Admiral in the penultimate game of the season. Ying also had four goals and 16 helpers in VHL action. Fellow forward Hu Yang, 22, also featured in the final two games as head coach Curt Fraser took the opportunity to run the rule over the young local talent within the organization. In the VHL he was the second-leading scorer for KRS-ORG with 38 (12+26) points from 52 appearances. A third forward, teenager Huang Qianyi, dressed for two games in December but did not make it onto the ice. He produced 8 (4+4) points in 45 VHL outings over the course of the season.

There’s plenty of VHL experience shared among the other four KRS players to make the national team. On defense, Hu Tianyu and Zhang Pengfei shared 95 appearances. Zhang, aged 20, also made 21 junior appearances for KRS Heilongjiang and took part in the prestigious Junior Club World Cup, while Hu, 27, has been involved in the Chinese national program since joining up with the men’s roster in 2010/11.

Three more forwards complete the roster, both mainstays of KRS-ORG this season. Zhang Hao, 29, brings a wealth of experience at international and has captained his country in the past. He played 24 VHL games for two assists. Zhang Zesen returns for his fourth international campaign after his most productive season in club hockey. He had 14 (8+6) points in 55 games in his second VHL season. Finally, Xiang Xudong earned a recall to the national team after featuring in 34 games for KRS-ORG.

China enters the tournament ranked fourth among the six teams after last season’s performance in Division IIA. After opening against Spain on Tuesday, there’s a testing fixture on Wednesday against a Croatian team that was demoted from Division I last season. Following a rest day, China plays back to back against Serbia and Australia before finishing its tournament on April 15 against Belgium.