We continue our review of some of last season’s highlights with a look at three games where Kunlun made a little bit of history. True, all of these ended in defeat, but only after a tie in regulation. And therein lies their significance: for the first time, our team left Nizhny Novgorod, Yaroslavl and Cherepovets with a point. Just a morsel, perhaps, but a tasty one.

Torpedo isn’t generally ranked among the top names in Russian hockey but, up to now, the Nizhny Novogorod team has been one of our toughest opponents. Indeed, it’s one of just three teams (along with SKA and Dynamo Moscow) that Red Star has yet to defeat in its three seasons in the KHL. Two previous visits to Nizhny Novgorod ended in 1-3 losses, although the two games were very different. In 2016 we quickly fell behind and only mustered a late consolation goal. The following year, though, the Dragons took an early lead and held on for much of the game, only to fall in the final seven minutes as Torpedo scored three in reply.

The third game proved to be the most exciting. The Dragons dominated the first period and Torpedo could count themselves lucky to get to the intermission with the scoreboard still blank. The second period followed a similar pattern, but this time the host got its nose in front with a breakaway goal from Andrew Calof in the 24th minute. Ten minutes later, Red Star’s problems got worse: Johan Sundstrom took a game penalty for slew footing.

It wasn’t long before a penalty on Andy Miele evened out the situation, putting the game into a 4-on-4 format. Taylor Beck took the chance to tie the scores. But then came another blow: Victor Bartley followed Sundstrom to the locker room, ejected on a hooking call, and we faced 72 seconds of 3-on-5 penalty kill. The guys dug in heroically to reach the second intermission intact, but there were still almost three minutes of Bartley’s tariff to get through.

The Dragons survived that and it was clear that Torpedo’s confidence took a blow. It’s entirely possible that home frustrations over that glorious missed opportunity spilled over, prompting a series of penalties that reduced the host to three skaters. We weren’t about to spurn the opportunity and in the 53rd minute Martin St. Pierre marked his Red Star debut with a goal that looked like it might be the winner.

That didn’t quite come off. Dmitry Semin’s equalizer in the 57th minute forced overtime; Denis Parshin won it at the start of the extras. Torpedo rode its luck to snatch victory from a game, helped by an exhausted Kunlun defense. Following Bartley departure, the team was left with just four recognized blue liners and could only ice two pairs throughout the entire third period. Although fatigue finally caught up with the defensive quartet, this result was definitely one point gained rather than a point dropped. 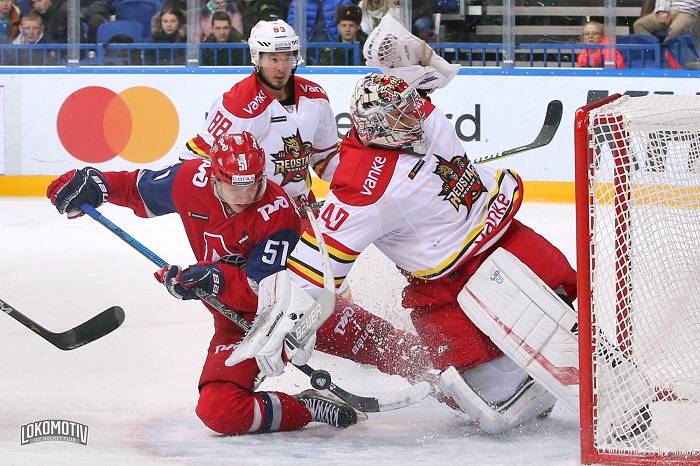 Our previous two visits to Yaroslavl ended with the home team winning by two clear goals – 4-2 and 2-0. This was the first time we came to Arena-2000 and put up a real fight, with either side looking capable of winning the game.

In the first period, the Dragons had the better of the game and managed to turn that advantage into a lead thanks to Justin Fontaine’s 13th-minute goal. Unfortunately, the lead didn’t last long: six minutes later, home captain Staffan Kronwall tied it up. Overall, though, the Railwaymen could hardly claim to have made a good start, as head coach Dmitry Kvartalnov admitted after the game.

“In the first period, every aspect of our game was weak,” he said. “We skated poorly, emotionally we weren’t on it … After that we played better but the game was still very even. But these are precisely the games where a team relies on its goalie and today Sasha [Salak] got us out of a hole.”

There was one moment where not even Salak could save his team. But when Kunlun got a power play chance in overtime and Brandon Yip fired a powerful shot at the open corner of the net, Salak and Loko were saved by the loud ringing noise from the crossbar. Thus, the Czech goalie got the chance to show his skills in the shoot-out and duly backstopped his team to the win. 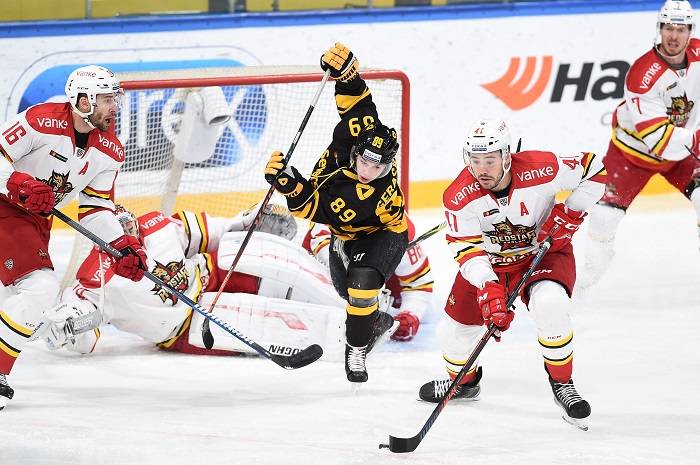 Severstal isn’t one of the most renowned opponents in the KHL but, nonetheless, the Steelmen have always been effective against us on home ice. The first game here was a routine 0-2 loss; the second, in contrast was a wild encounter that ended with a 5-4 home victory.

This time, the home team took its accustomed lead in the first period thanks to a goal from Vadim Kudako. After that, though, things began to change. The Dragons steadily seized the initiative but struggled to get that tying goal.

It wasn’t until the game was in its final two minutes that Red Star managed to find the net: Patrik Lundh sent Olli Palola, the team’s leading goalscorer at that time, up the ice. The Finn had a sight of goal but opted to serve up a dish for Brandon Yip. The captain converted the chance and drew level with Palola in the scoring race. More importantly, Kunlun drew level in the game and collected one more point.

Unfortunately, overtime play was something of an Achilles heel throughout the entire season. Our first experience of the extras was successful, defeating Slovan in a shoot-out. Subsequently, though, we saw 11 games tied at 60 minutes and 11 losses in the subsequent tie-breaker. Here, Severstal needed just 53 seconds to secure the win thanks to Vladislav Kodola’s goal. But at least on this occasion there some consolation: for the first time we weren’t leaving Cherepovets empty-handed.

Now there are just four cities in the KHL from which we have yet to claim at least one point: St. Petersburg, Magnitogorsk, Helsinki and Balashikha (twinned with Omsk during Avangard’s exile from its Siberian home). We’re looking forward to season #4 and the chance to raise our pennant over these previously impenetrable fortresses.