With the approach of spring, it’s high time to look back at some of the highlights of last season – the third in Kunlun Red Star’s history. One of the most exciting things about following a young club from its birth is that so many things take place for the first time and can thus be described as truly historic. The season just gone was no exception, and we’ll look over a few historic achievements in the coming days. Let’s start with some of the most resonant games of the campaign – Red Star’s first ever victories against three of the giants of Russian hockey.

In its first two seasons, our team faced 28 different opponents in the KHL (four of them, Medvescak, Metallurg Novokuznetsk, Ugra and Lada are no longer in the league). And only six of those opponents had never tasted defeat at the fiery tongues of our Dragons in those campaigns. By the end of this season, that list was down to three: now we can claim victories over Ak Bars, CSKA and Avangard. 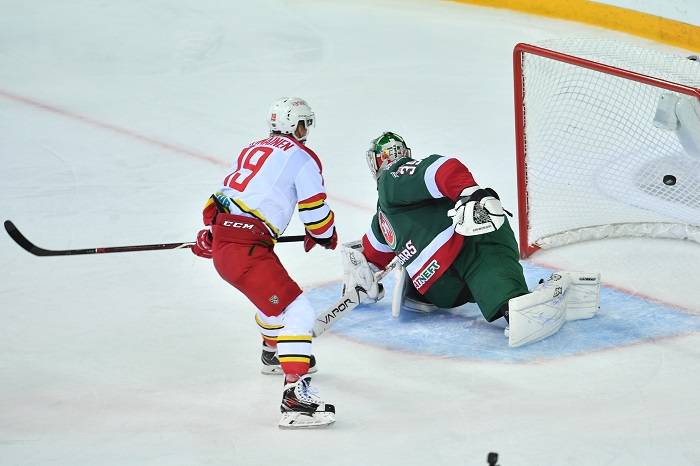 Whenever we came up against the winningest club in the KHL, we gave them something to think about. Only in our first season, when we suffered a 0-2 loss in Kazan, could anybody suggest that Ak Bars had it easy against us. The other games saw long periods of evenly-matched hockey; twice we lost out by a single goal while in August 2017 we shocked the Tatneft Arena by taking the lead twice before losing out 2-4.

This time, things were to be a little bit different. Our trip to Kazan started well, with Taylor Beck putting the Dragons in front in the 16th minute. Shortly after the break, Beck added a power play goal to double the lead. This was something of a first – we’d never led by two in Kazan before – but the home crowd remained quietly confident of a comeback. The expectation seemed to be that the defending champion could swiftly step up a gear and put these troublesome guests back in their place.

And that was more or less what happened. A blast of three goals in just 41 seconds turned the game upside down. Midway through the second period, Rafael Batyrshin, Rob Klinkhammer and Artyom Lukoyanov put Ak Bars ahead. Normal service resumed?

Not likely! The Dragons dug deep and came back into the game. Four minutes before the second intermission, Victor Bartley’s blast from the blue line tied it up once again. As the third period began, the teams’ psychological strength was set to be as decisive as their hockey skills.

For Ak Bars, veterans of countless high-pressure situations in the playoffs down the years, this was meat and drink. The game remained tied until the closing minutes, when Brandon Yip was sent to the box. Now the home crowd was ready to feast on another late game-winner – but this dish was not prepared to the tastes of the host.

Ak Bars poured forward in search of a goal, only for Ondrej Vitasek to clear the puck from the Red Star zone. Veli-Matti Savinainen gave chase, hassling the experienced Andrei Markov into a stumble and stealing the puck. The Finnish forward went one-on-one with Alexander Sharychenkov and despatched the chance to the top shelf while the goalie grasped at thin air.

There were just 75 seconds left, but how long they felt! The penalty kill had another 63 seconds to run, most of them played as four against six, but the guys hung on. Ivan Nalimov performed heroically, stopping 37 shots. It turned out to be the last of the young goalie’s four games for Kunlun, and earned him his solitary victory.

As for Ak Bars, we proved this was no fluke a month later in Shanghai. There was no such drama this time: Braydon Jaw potted his first KHL goal, Tomas Mertl scored on the power play and Michael Latta added a third midway through the game. It finished 3-0; two wins from two against the defending champ.

Coincidentally enough, our second historic victory of the season also came on the road, and also came by the same 4-3 scoreline. It’s true that we’d enjoyed a little more success in our past games against CSKA. On one occasion we even managed to pick up a point from a battling overtime loss in Shanghai, clawing back a 0-3 deficit only to lose late in the extras. That represented something of an achievement after failing to even score against the Army Men in our first season, while the first meeting between the teams this season also saw us blanked by the Muscovites.

But now came a new battle in Moscow, at an arena that had only recently been renamed in honor of CSKA. The host arrived in terrific form, boasting a 12-game winning streak. In contrast, we were rather less confident and had just suffered a defeat at Slovan Bratislava. But, as events would prove, form alone doesn’t decide the outcome.

Palola got his second at the start of the final frame, making a strong bid to be the key player in the game. It wasn’t just his two goals, the Finn bravely battled on despite taking a stick to the face in the second period. That sent him to the locker room, where team doctor Vadim Vybornov swiftly patched him up. The painful blow didn’t greatly disturb Palola; in the 42nd minute he scored what turned out to be the winning goal.

Not surprisingly, CSKA threw everything forwards in the closing stages as it battled to salvage the game. The shot count for the third period read 18-4 in the host’s favor, but Barry Brust was not going to let anything deny him a winning debut in the Kunlun net. Konstantin Okulov pulled a goal back in the 53rd minute and a couple of minutes later the Army Men thought they had a third. However, a sharp-eyed challenge from Red Star’s bench saw that effort ruled out for offside.

Okulov belatedly scored a legitimate third for the host, but time was running out and Kunlun held firm for the remaining 74 seconds to seal another memorable victory. 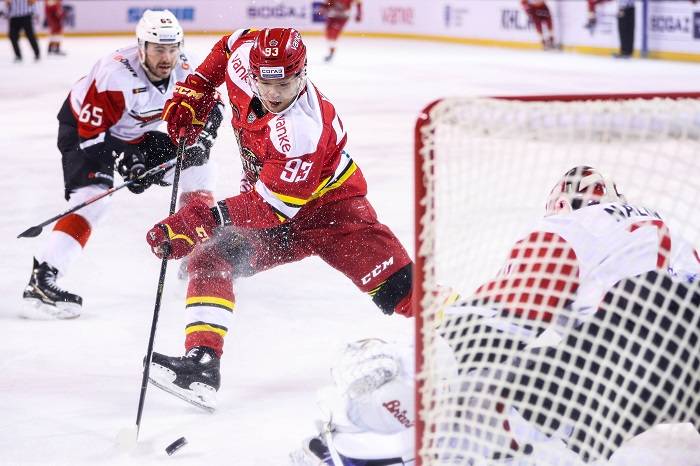 We needed five attempts to beat Ak Bars and six to defeat CSKA – but our first victory over Avangard arrived in the eighth meeting between the teams. It came in the last of our four match-ups this season and was masterminded by a new head coach. The two games discussed above were during Jussi Tapola’s tenure behind the bench; this chapter of the history books was written by Curt Fraser.

Previously, Red Star’s meetings with Avangard had been tough. Just once, in our first meeting, was the margin limited to a single goal. Even there, it took a late rally from our Dragons to close a 1-4 deficit and set up an anxious finish in Shanghai. Subsequently, Avangard picked up convincing wins: 3-1, 3-0, 4-0, 4-2, 5-1, 6-3. This long-awaited win would prove that even the most dismal streak could come to an end.

It’s fair to say that the timing was right. Fraser’s arrival had lifted the team and freshened up the game plan but had yet to deliver an improvement in results. We kept on losing, despite a new attitude and a new approach to the game. But this evening, our last in Shanghai, changed all that in fine fashion.

Spare a thought, though, for Ivan Nalimov. The goalie, our hero in Kazan, faced his former colleagues and did everything he could to keep them at bay. But it wasn’t enough to deny a reinvigorated Red Star roster, and his new team-mates failed to provide the necessary support, especially in front of his net. Three of the goals came as the defense parted on the slot to allow Kunlun’s forwards a good look at Nalimov’s net.

Veli-Matti Savinainen twice scored on the power play, with Brandon Yip scoring a goal at equal strength in between to make it 3-0 by the 27th minute. In the third period, Sergei Shumakov pulled a goal back and the visitor threatened a revival, but Zach Yuen soon raced through on a solo rush and confidently beat Nalimov. A David Desharnais power play goal gave Omsk renewed hope, and Nalimov was called to the bench in favor of another skater. However, Palola scored into the empty net late on to wrap up an impressive Red Star victory.

After all that, there are just three remaining teams that Red Star has never defeated in three seasons of KHL action. They are SKA, Dynamo Moscow and Torpedo. Next season’s plan is to steadily erase them from the list …