Looking for the right mix 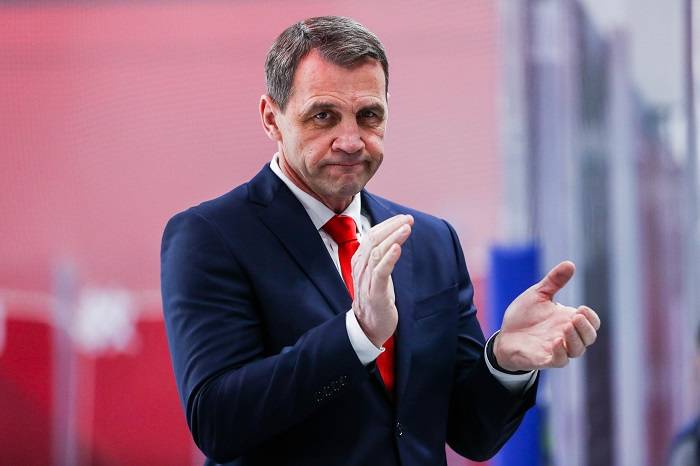 Renowned American coach Curt Fraser found himself in at the deep end when he took over behind the bench at Red Star. Following Jussi Tapola’s departure, Fraser was whisked off to China where had to combat not just the opposition, but also a rash of injuries that devastated his team. In the end, the team fell short of a playoff place, but his short stint in China made such a deep impression that Fraser is eager to return and continue working on this unique hockey project. He told khl.ru about this, and much more.

You joined the team late in the season, so perhaps we can start with your first impressions of hockey in China?

It was a really amazing experience to come over here and meet the players, meet the staff and see how things were running with the Kunlun team and get acquainted with it. To come here to Beijing for the final two games and see a facility like this arena and see what this could become in the future was really exciting.

How easy was it to adapt? The team was mostly North American, which would be familiar to you, but the surroundings were completely new.

Fortunately for me I went over to Belarus 10 years ago and spent two years there. I kinda got used to that. I even tried to learn a little Russian. I had good people there, good assistants who spoke English and Russian and translated for me. A lot of the kids spoke some English because they’d played in North America. Coming here was surprising. A lot of the Chinese heritage kids came over from North America to play here so that part of it, the communication, wasn’t much of a challenge. I still have to get used to the staff. Hopefully I can pick up a little more Russian and Chinese but overall it was an easy transition to come in.

And it was great to see the league, the KHL is fantastic. There’s some great hockey played, we had some great games. I would have liked to have seen the team when it was healthy and everybody was playing. I haven’t even met a few of the players that you guys had at the start of the year, they’re not even here!

Overall it was a fantastic experience, I loved the team and I think this team can really improve in the future and get prepared for the Olympics.

When you worked in Belarus the KHL was just starting, so this would be your first close-up look at the league. What did you make of it?

When I was in Belarus I had to go see the Belarusian kids playing and I went all throughout Russia. I got the chance to see it then, but as a spectator. Obviously, there was no coaching. Now I’ve come in and got behind the bench and seen the level of play in the league, the different teams, the different styles, the ice surface. It was fun. I had a blast standing behind the bench trying to help these kids and it was nice to see them compete so hard. But again, when Wolski came back at the end, when Ville [Lajunen] and Sam [Lofquist] came back on defense, all that made a big difference. I can’t wait to see the team in the future when this injury bug is gone. When everybody is healthy and playing well it will be really fun to coach this team.

I know your contract situation is under discussion, but it sounds like you’d love to stay?

Everything is moving forward here. I’ve had some good talks with our owner, Billy, and our GM, Raitis. You look at the staff, the assistants, everybody loves it here. I can see good things for the future for the team. That’s exciting for everybody. I don’t know what’s going to happen in the future but I would very much like to stay and be a part of this and see if we can do some good things.

Your initial contract was to the end of the season. What can a coach do in such a short-term role? What do you expect from yourself?

I think for me the task was to get acquainted with the league, the players and the staff in a short period of time. They’ve had a difficult season and when I came in here I wanted to try to refocus the team, add a few things and push them back in the right direction. The team seemed to respond really well but 12 games is not going to show a whole lot. In the future, hopefully we’ll have more time to prepare and the guys will get more time to get used to my coaching style. Hopefully the combination will turn out to be successful.

I watched a few of the games that the team played before I came. You could see that they went through a difficult stretch. They were coming apart. It wasn’t a team any more, it was a group of individuals. My goal was to add a structure, try to bring the guys back together and find a way to encourage them and lift their spirits up. The first two days when we went on the ice, it was fantastic. The guys were flying, they were excited. But as you go along and you come up against these difficult opponents, sometimes you fall back into where you were before. That was a good challenge for our coaching staff. We had to battle against that and not let it happen. We tried to make a fresh start for everybody, tried to finish strong in those last 12 games and get back playing the right way. I think we might have achieved that. Hopefully the players went home feeling good about themselves, feeling encouraged about the future here and ready to prepare for next year.

Although this is a club position and not a national team, maybe there is something in common with your work in Belarus because of the focus on preparing Team China for the Olympics. How does that influence your job at the club?

This is almost more like when I was coaching in the American League. It’s all about development, developing these young Chinese players and making them into effective, competitive hockey players. That’s not going to happen overnight. It’s going to take a while and a lot of hard work. If we can surround these Chinese players with the right leadership and play them with experienced players who can help them grow, we can get some good things done in a short period of time.

But it’s a hard jump from the VHL or the lower leagues to the KHL. These are men, they’ve been playing for years; the clubs have been together for 40 or 50 years and it’s very difficult to bridge that gap. At the same time, the Chinese kids work very hard, they just need more time to get into better shape, to improve their skills and their skating. With the right leadership I think we can accomplish that.

Having an assistant like Alexei Kovalev must be ideal. He can show them so much.

Alex was fantastic. I’d never met Alex but from the first moment I walked in the locker room he was a huge help. He brought me up to speed on everything. He’s been working with these guys relentlessly, doing the skill work, and a player of the quality of Alex Kovalev will definitely rub off on them. The only thing with Alex is I think he still wants to play every shift of every game. I gotta hold him back on the bench so he doesn’t put his skates on and get out there. He was an amazing player, he’s a really good coach and he’s great with these kids, teaching them what they need to know.

Did you get to see some kind of foundation from which Chinese hockey can build?

Coach Barkov is doing a fantastic job developing the Chinese kids, the ones who live here. When they come to us, we know they are prepared and we can take the next step with them. Again, though, it’s not going to happen overnight. It’s going to take some time to bring these players up to speed. But that’s where it’s nice to have the influence from North America with the Chinese heritage kids. When they come in they’ve got more experience, they’ve played at a higher level. Bringing those guys over and mixing them in with the kids that live here is really going to help.

We just have to get the right mix. We want the right leadership from the North American players to help teach these kids and after that it’s going to need lots of hard work. Our coaching staff is going to have to work hard. We need to find a way to work with all of these kids, developing their skating skills and getting them some experience of playing games so that they can develop into these players that can compete in the Olympics. It’s going to be very, very difficult but I’m excited about the challenge. It’s possible. For sure, it’s going to have to happen in a little shorter time than maybe you’d like. But right now it’s all about surrounding these players with the right people and teaching them how to play the game in the right way.