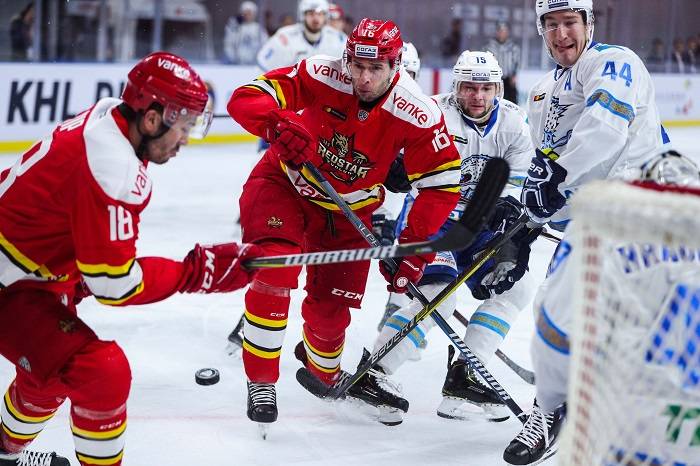 The end of the season came all too soon. No playoff campaign to look forward to, and our return to Beijing lasted just two games. But, looking to the positives, those two games showed signs of a brighter future for Red Star despite all the disappointments of a campaign wrecked by injuries after a promising start.

Friday’s shoot-out loss at home to Chernyshev Division champion Barys ran down the curtain on a campaign that has seen the good and the bad of life in hockey’s big leagues. Memorable victories against Gagarin Cup holder Ak Bars and regular season champion CSKA are obvious stand-outs; the emergence of young Chinese talent from goalie Sun Zehao to forwards Chris Seto and Rudi Ying suggest that the team is moving in the right direction despite the frustrations of another year without postseason action. And then there was the encouragement of returning to Beijing for the first time this season and finding that the audience for hockey in the Chinese capital is still with us. Filling the Shougang Arena for these final games of the season would have been unimaginable when the club started its life; today’s reality shows that the Kunlun brand has helped to establish our game in the public eye. With the 2022 Olympics drawing ever closer, that’s a sign of vital progress.

On the ice this could have been a tame end-of-season affair with relatively little riding on the outcome for either team. Not a bit of it! This turned into a hugely entertaining game, with no shortage of action from start to finish. The first period saw both goalies given plenty to do as the teams shared 35 shots on goal. Barys was the first to strike in the fifth minute, when Yegor Petukhov stole the puck on his own blue and streaked up the ice to score a short-handed goal.

After that early lapse, the Kunlun power play turned up the heat. Our next penalty chance, midway through the opening frame, saw the guys draw level. Veli-Matti Savinainen and Wojtek Wolski combined to send Drew Shore to a one-on-one with the visiting goalie. Shore went five-hole, the puck rattled between Dominik Hrachovina’s pads and dropped into the net.

Early in the second period, that power play struck again. Wolski, a provider in the opening frame, turned poacher for this one. He pounced on a loose puck by the right boards, held off the attentions of Dustin Boyd to get to the net and lifted a backhand shot into the far corner to give Red Star the lead. That made it two goals in two games for Wolski on his return from injury; how big a difference might our Olympic bronze medallist have made if he had been fully fit for the final two months of the season?

Wolski’s goal was not enough to secure a win in regulation time. Early in the third, Maxim Semyonov’s point shot got a touch from Andre Petersson to redirect the puck past Alex Lazushin and tie the scores. That prompted the visitor to raise the tempo in the closing stages, but Lazushin held firm to take the game into overtime. Those extras saw a great opportunity for Red Star when Boyd was sent to the sin bin for high sticking. Brandon Yip went close to a winner, Ville Lajunen and Justin Fontaine were also denied by Hrachovina before the game went to a shoot-out.

Red Star’s weaknesses when games go to overtime are well known and, sadly, today was no exception. After more than matching one of the top teams in the Eastern Conference for 65 minutes, Kunlun struggled in the shoot-out. Hrachovina won all four of the duels he faced while Brandon Bochenski and Roman Starchenko scored at the other end. But the bonus point for tying in 60 minutes was enough to keep us ahead of Admiral and Amur. A final placing of 11th, two clear of the bottom of the Eastern Conference and, in spite of everything, just seven points adrift of a playoff spot, gives some scope for encouragement and plenty of indications about what needs to be done to extend the 2019-20 campaign into the spring. The season may be over but, for the club, the work continues: the next challenge is to fine-tune the roster into a team capable of cracking the top eight.