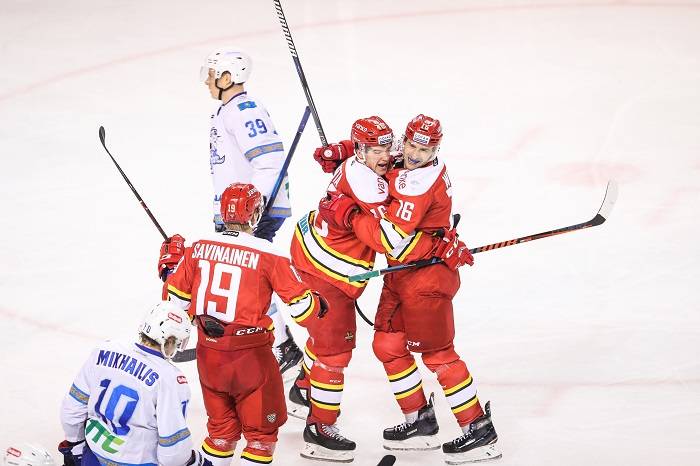 It’s been a long time coming but finally we are heading back to our first home. It’s a long time since Red Star has been able to play in Beijing but the last week of the season sees the team back at the Cadillac Arena. In the past, the team has attracted some big crowds to this Olympic venue – in our debut season, the average attendance here was over 5,000, comparable with many other KHL clubs. Even though it won’t be possible to turn these last two games into a push for the playoffs, it’s still a thrill to be back where it all began for us back in September 2016 when we defeated Admiral 6-3 here as China staged its first ever KHL hockey game. Fittingly, Admiral is our first visitor this week, with Chernyshev Division champion Barys Astana also visiting.

The games might also see a new club record established. Brandon Yip is on 20 goals for this season, matching Chad Rau’s tally from our inaugural campaign. One further marker for him would make our captain the highest-scoring player in a single season.

Last time out: We travelled to Vladivostok on Feb. 6 and suffered a 2-3 loss after Alexander Konnov’s late goal completed the home team’s recovery from 2-1 down. Our last home game against Admiral brought a 4-3 win thanks to a third-period goal from Brandon Yip.

Familiar faces: Our blue liner Oskars Bartulis joined us in November after playing with Admiral last season. Since then, though, he has been beset by injuries and has managed just 15 appearances, suiting up for the last time in our 2-0 win at Traktor on Dec. 30. Forward Martin St. Pierre played 10 games for Admiral last season, collecting four assists in that time.

Background: Victory in this game would see Red Star move back up to 11th in the Eastern Conference would boost the team’s chances of finishing rock bottom of the section. It won’t be easy though. Only one point separates the teams but, despite a season of struggle, Admiral has hit some form in the closing weeks of the campaign. With its playoff prospects gone, the team began to play with greater confidence and it comes into Wednesday’s game on a run of four wins in its last five games. That includes back-to-back successes against Salavat Yulaev, albeit in games where the Ufa team iced a weakened roster after securing its own playoff spot, and a win on Monday over Barys.

Danger men: Defenseman Alexander Ugolnikov and forward Alexander Konnov are the leading scorers during Admiral’s recent revival. Both have 3 (2+1) points from the last five games. Vladimir Butuzov is still popping up with big goals, including the game winner against Barys last time out.

Last time out: Just over a week ago we went to Kazakhstan and suffered a 3-1 loss. Pavel Akolzin scored twice for Barys in that game.

Familiar faces: Martin St. Pierre lines up for Kunlun against a Barys team he represented for three seasons. In the opposition ranks, Jesse Blacker returns to China where he played for Red Star last season.

Background: Barys secured the Chernyshev Division title on Saturday to match its best ever regular season in the KHL. However, it wasn’t exactly a victorious procession for the Kazakh team. First place was clinched despite losing to Avangard in a shoot-out, and the celebrations clearly took their toll as Andrei Skabelka’s team went down 1-2 in Vladivostok on Monday. With the visitor already looking ahead to its playoff campaign – and dreaming of going deeper than ever into postseason – that could open the door for Red Star to finish its season on a high note with a victory against one of this year’s high flyers.

Danger men: Andre Petersson remains one to watch. He’s produced 6 (2+4) points in the last five games but the Swede has yet to add to his tally in his two games against Red Star this season. Pavel Akolzin, meanwhile, found our visit last week very much to his liking. His two goals in that game were his first since Dec. 6.