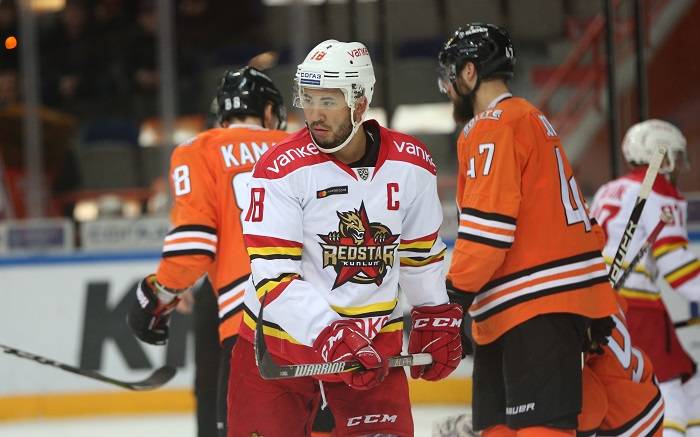 This was one of those days where we needed to look hard for a silver lining. A heavy loss at the hands of one of our rivals in the Far East was a depressing way to conclude our program of road games for the season. Only twice in the club’s history has the team allowed more goals in a single game, and both previous occasions were against the top clubs in the KHL. This loss hardly creates the ideal frame of mind for our long-awaited return to Beijing, where Red Star is looking forward to playing its final two games of the season later this week.

Happily, though, there was still something to cheer. Brandon Yip’s 49th minute goal made little difference to the final outcome of the game but it saw our captain score his 20th goal of the season. That equals Chad Rau’s total in Kunlun’s first season and ties the club’s all-time goalscoring record for a single campaign. With two games to go, Yip could be celebrating a new Red Star record to mark his first season as captain.

It was a well-taken goal to bring Yip to 20. Patrik Lundh’s pass out of defense split the Amur team and Yip was off to the races. He still had plenty to do though, facing down Marek Langhamer in a solo duel and produced a deft wrister that flashed into the top corner to give the Czech goalie no chance.

In another context, it might have been a highlight reel moment. Unfortunately, in this context it came after we had allowed seven goals to Amur in a game that, for the most part, will be best forgotten. Things started well enough. Looking to avenge a loss here on Saturday, Kunlun roared into an early lead when Blake Parlett surprised Langhamer with a point shot that left the goalie motionless as it went past him. That came after 99 seconds of the game; it would be midway through the third period before Langhamer was beaten again and by that time, Amur would have put the game far beyond reach.

Red Star enjoyed the better of the first period after that early goal, although a steady string of penalties for both teams disrupted the flow of the game and made it hard for anybody to establish much of a rhythm. After failing to add to its lead, Kunlun then saw Amur draw level late in the frame through the club’s record KHL goalscorer Vyacheslav Ushenin.

Everything went wrong in the second period, with Amur blasting three goals in two minutes to take a firm grip on proceedings. This was one of those middle-frame flops that had become less frequent in recent games; today a familiar problem was back with a vengeance. Amur fired in an incredible 30 shots at Alexander Lazushin in the space of 20 frantic minutes; this was perhaps the toughest examination we faced all season.

“Tonight our team probably played the best first period since I’ve been with them,” said head coach Curt Fraser. “Then in the second it looked like we totally ran out of gas. Maybe the long road trip caught up with us, but that second period was not very good.”

Late in the second period Nikita Kamalov’s power play goal added to our woes and persuaded Fraser to give young Chinese goalie Sun Zehao a run-out in the last 20 minutes. Sun, a highly-rated prospect within the club, let nobody down and stopped 13 of the 15 shots he faced. With Amur rampant, he limited the home team to just two more goals. Yip popped up to have the last word; Red Star started and finished the game on a positive note, but there was little satisfaction from what came in between.