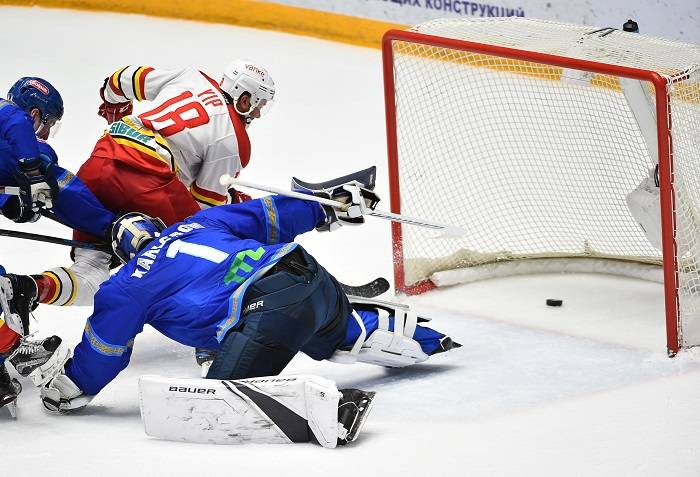 With just three more road games left in regular season, it off to some familiar destinations. Thursday brings a trip to Kazakhstan to take on Barys before Saturday sees us visit our most local rival, Amur Khabarovsk.

Last time out: An impressive 3-1 win here back in January was one of the highlights of our season so far. Two goals from Brandon Yip led the way, with Patrik Lundh getting the other.

Familiar faces: Barys is home to Canadian defenseman Jesse Blacker, who played for Red Star last season. Our roster includes Martin St. Pierre, who picked up an assist against his former club in last month’s victory.

Background: Barys is duking it out with Avangard to for the Chernyshev Division title. If the Kazakhs succeed, they will match their best-ever placing in a KHL regular season and take second place in the Eastern Conference. The team’s success comes from its scoring power: with 182 goals in 57 games, it is the most prolific in the East and second only to SKA (191 goals) in the entire KHL. February’s three games have seen another 15 goals added to that tally, including an 8-2 thrashing of Jokerit Helsinki. Last time, Kunlun neutralized that offensive threat; can we do it again?

Danger men: Viktor Svedberg was named as the KHL’s top defenseman for January after picking up five points and a +8 coefficient. Fellow blue-liner Darren Dietz leads the team’s scoring with 51 (15+36) points and has four from his last four games. Andre Petersson is the leading forward – a hat-trick of helpers in Tuesday’s 5-2 win over Sibir moved him to 43 (22+21) points for the season. The Swede has 10 (6+4) in his last six games.

Last time out: On Jan. 31 we suffered a shoot-out loss in Khabarovsk. Earlier, the teams traded victories in back-to-back games in Shanghai in December.

Familiar faces: Only Amur forward Igor Velichkin has played for both clubs, and his opportunities have been limited this season.

Background: Amur is on the foot of the Eastern Conference table, despite picking up a 3-2 win over Salavat Yulaev on Tuesday. Recent form, though, has not been that of a struggling team: four wins in the last six have given something for fans in Khabarovsk to cheer at the end of a difficult campaign. The problems came earlier in the season, with a 10-game losing streak that took in most of January typifying the struggles for Alexander Gulyavtsev’s men. If this game is tied, it would offer both teams a chance to improve on two of the KHL’s weakest records in overtime. Red Star has just one shoot-out win all season, while Amur has won once in overtime and once more in that shoot-out against Kunlun last month. Only Dinamo Minsk (two shoot-out wins) has been similarly ineffective in the extras.

Key men: Pavel Dedunov and Tomas Zohorna have led Amur’s scoring in the last few games. The Czech also made a handy contribution on the international stage over the weekend when he helped his country win the Swedish Hockey Games in Stockhom.