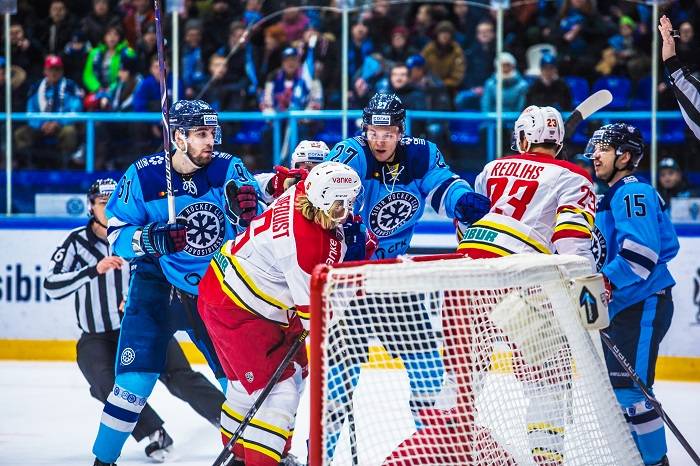 On the eve of China’s New Year festivities, Red Star’s latest trip to Siberia felt like a game that might define the passage from one era to another. Two of the closest challengers to eighth-placed Traktor were going head-to-head in a bid to close the gap on the playoff places. And, with games running out, there wasn’t much margin for error. Victory would underline our status as genuine playoff contenders; defeat would leave a ticket to post season looking like a remote prospect.

One of the features of Kunlun’s season has been a willingness to compete. Even though the team has often been short of key players – today, as has usually been the case, head coach Curt Fraser could name just six defensemen – this is not a group that rolls over in the face of adversity. Visiting Sibir, where a storming run in the latter stages of the season has almost rolled back the huge deficit sustained during an opening 12-game losing streak, Red Star once again showed plenty of heart and battle even if the final outcome got away from the guys.

“We knew they were gonna start fast and I thought we maybe got off to a bit of a slow start,” said Fraser after the game. “But then we dug in, in the second and third, and I thought our team played better. Alexander [Lazushin] kept us in as long as he could but through the game our penalty problems were tough on us.

“I thought we had a chance in the third but Sibir did a nice job tonight, they played well.”

That fast start was noticeable. Sibir, buoyed by its shock victory over SKA two days ago, roared into action and pushed our guys onto the back foot, but Red Star stood up to the onslaught and was not afraid to try and take the play to the opposition wherever possible. The home crowd was beginning to get frustrated until the 16th minute, when Sibir crafted a superb breakaway and Dmitry Sayustov converted the move to give the home team the lead. The middle frame saw Red Star hanging tough. Victor Bartley’s point shot tied the scores early in the session then Lazushin made 19 stops to keep the scores level through to the intermission.

Even after going behind again in the third, Red Star had the spirit to hit back almost immediately: Blake Parlett got the slightest of touches on Joonas Jarvinen’s shot to deceive Alexei Krasikov and make it 2-2 with 10 minutes to play. But it wasn’t enough. Precisely one minute later Shane Prince restored the home lead – former Kunlun man Gilbert Brule picked up his second assist of the game on the play – and even Lazushin’s heroics between the piping could not deny the home team the verdict.

So, another loss. As we said at the start, it had the feel of a must-win game. However, the battle for a top-eight finish is not yet over. It’s a tall order, making up eight points with just six games left to play. But while there is still a mathematical chance of getting to post-season, the team will continue to do everything possible to find its way there. Meanwhile, as head coach Fraser explained in a recent interview with Sport-Express, the end of the regular season also offers a chance to get our players fully accustomed to his new system and to assess which guys best fit the demands of our plans for the coming season.

Red Star’s next game is on Wednesday away at Admiral. Then the team has a short break for the international action before picking up again at Barys on Feb. 14.