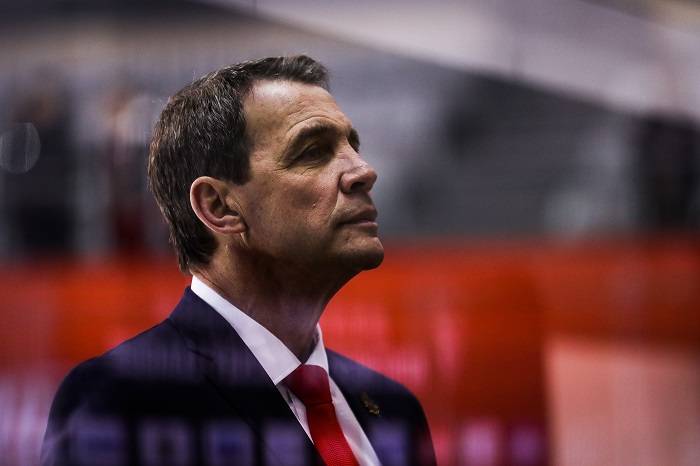 You were Ilya Kovalchuk’s first NHL coach. It’s no secret that this season has been a tough one for the star in LA. Where do you think the issues lie?

Ilya is a really unique player. His skills are off the charts. I had him when he was a young guy, and even then he was fantastic. He’s got a certain way that he likes to do things, and it took him a while to figure out the NHL even though he was putting up big numbers. But it’s all about a bit of defense too. He was brought up to score goals and to win the game offensively. I know that for a fact. I tried to change him a little bit and help him—just a matter of being more responsible, because he is a player who can win you the game single-handedly. I think he got better and better. He came over to the KHL—but you have to remember, the KHL is not the NHL. The KHL is a great league, but the NHL has the best teams and players. It’s very, very difficult to play and now everyone knows who Ilya Kovalchuk is. They’re not going to be easy on him out there—they’re going to check him to death! I’d have to think that if he’s going to have a tough time, it’s because the secret is out and opponents will take away any options to move the puck.

I think LA, in general, has struggled from the very start of the year. I don’t think that was an easy situation for a kid like him to step into—he’s a goal scorer. He needs somebody to set him up. I had Dany Heatley who set him up every game, and Ilya would finish. If he doesn’t have a guy like that, it’s going to be hard for him to create.

You represented the United States in the 1987 Canada Cup. What was your experience of the Soviet team?

Unbelievably skilled. Worked and competed hard, smart. We had amazing games against the Soviets, but it would go back and forth. They were usually loaded and our teams weren’t so good back then. But we got better over the years and things changed. We took a lot from what they did—their systems and styles. We stole a lot of their secrets and put it into our game. Now you see what’s happening in the NHL. It’s fast, skilled—and a lot of that was probably because of the way that the Russians played back then. We were big and tough and hit everything, but they moved the puck past you and could find the back of the net a whole lot more than us. Now I think our game is a whole lot more intertwined—both have come together. I am sure they stole some of our ideas with regard to physical play and battling. They were great teams back then and are still great today. Unbelievably talented and skilled, and I love watching them.

These showdowns between “West and East” were layered with political antagonism. Did the larger political picture ever get to you as a player?

It was a big deal, but not as players—you were playing just another team. The Soviets were very difficult. There was the big hype all the time, but as players you just felt proud to play for your country and didn’t care if the opponent was Finland or Sweden or whoever. Russia was obviously a little more intense because they were better, so when I was playing against them, I wanted to beat them in the same way that I wanted to beat any of the other European teams.

Valeri Nichushkin was one of the best prospects in a very strong draft (2013). What is the source of his struggles right now?

When Val came over, he was a big, strong player and great skater. He looked amazing. There’s a tournament for young prospects in Traverse City before the season starts every year, and he was one of the best players. Then he came to camp and was playing with Tyler Seguin and Jamie Benn. He put up 15 or 16 goals, and he could have had 30. Next year, the lines changed a little and he got off to a bit of a rough start. He was really hard on himself and it was difficult for him. At the end of the year, I believe that he wanted to be back with Tyler and Jamie. Maybe he could have, but the coach at that time felt he didn’t earn it. He wasn’t having a great season and so he decided to go back to the KHL.

We thought that wasn’t the best decision. He should have worked through it, and maybe he could have gone into the American League and ripped it up for a month or two to get his confidence back. For whatever reason, it didn’t work out—and then he came back to the KHL. Now he’s back in Dallas, and he’s a good kid. He has a lot of talent, but he just needs to find his game there. It has been very difficult for him to make the transition.

He’s got a lot of a good tools—a big body, he moves well. He gets chance after chance after chance, but the puck is not going in for him right now. He’s the kind of kid who gets frustrated because he wants to do well and help the team. It will take him a little while to get going.

Does Denis Guryanov have a bright future in Dallas?

Denis is awesome—great attitude, happy and smiling all of the time, working hard. I think he is going to be a really good player for Dallas in the near future. Now everyone thinks, “ok, why isn’t he there right now?” It’s very difficult for a young player to step right in and take the job of someone else who has been there for a while in the NHL. The NHL is extremely tough to win in, and you need guys who give you the best opportunity. Denis has been up a few times this year, and he’s terrific. But it’s still a matter of whether you play him, or a guy who has been around for ten years—it’s all about winning now. If you could play Denis every game for 25 games and let him make mistakes, let him learn and get a feel, it would be awesome because then he would turn into a really good NHL player. As of right now, they’re playing “live or die” every night, and I think they are going with the veterans a lot. I am not sure if he’s back or not, but he will eventually stick there and have a great career in Dallas.

It’s early days for you in the KHL, but do you feel any of the legacies of those Soviet squads carried over? How strong is the North American style influence?

This is a high-tempo league. I’ve only coached here for a few games, but I saw a lot of games in the past when I came to scout players. It has always been pretty impressive. From a North American perspective with smaller ice surface and more physical games, it’s a little different. I am still getting used to it. I had some good experience in Belarus with the big ice surface and got to know it, but a lot of the games are played increasingly in North American style. It’s firmer, more structured, with not so much free-wheeling movement. They’re good games. Ask me again in another ten games!

You mentioned your experience in Belarus – what was the situation that you walked into there?

I was asked to go [to Minsk] and help out with the national team. I didn’t know what to think. After I got on the ice for the first few times with the players, I saw that they worked so hard. They are so committed to the hockey. The people were awesome and treated me like gold—I loved the players. We played some great tournaments and we had some really good times and some really tough times, but overall the experience was amazing. And then we got to play in the World Championships in Quebec City and they qualified for the Olympics. I have a lot of fond memories of the people and the whole experience of the Belorussian hockey culture.

Some North American coaches such as Bob Hartley were cautious to join the KHL due to rumors of mismanagement. What were your perceptions of the league before moving?

I don’t think any of us have heard anything different from what Bob heard. What cleared things up for me was my experience in Belarus. I am sure there are bad things that have happened and built a reputation, but there are so many good things. Just like any other league in the world, people have problems to deal with. The KHL built a league that’s getting better and better, and now there are none of the issues anymore. Everything is straight forward. Again, I’m early in the battle here—but as of right now, I’ve seen no issues.

How do you adjust to the KHL’s larger ice size from a strategy perspective?

It’s more about looking after the middle of the ice—angling. Kunlun wants to defend well, but to do that, we need to check well. It’s about defending the middle of the rink, angling everything to the outside in order to keep up with the speed and skill of our opponents. When I first got [to China], there was too much standing around. Now you’ll see more of an angling where players are not getting stuck flat-footed. Our d-men are helping our forwards and vice versa; I am trying to get everyone working better together. Hopefully that will pay off for us in the future. If we can ever get away from this injury bug, that would be amazing. I think things will move along here in a very positive direction, and I am happy to be a part of it.

Kunlun has had a difficult season. If you had one wish granted for them tomorrow, what would it be?

For me, if I had one wish, it would be to see this team healthy with all of the players in the lineup and playing at a high pace. That would have been fun, but it has been a tough year for this team. That’s part of growing. As we move through these last regular season games, we want to continue to implement the new system, get everyone on board, and evaluate these guys. When GM Raitis Pilsetnieks makes his decisions, he will have good pieces in place and we can add some great pieces for the following year.

I love their competition level; they compete hard. I want them to keep moving. My first game here against Salavat Yulaev, they played on emotion and energy and enthusiasm—but they didn’t win. Then the second game came around and we outshot Ufa 40 to 20, chances were great—again, we didn’t win. I’d love, in the first ten minutes of the next game, to see something really good happen to this team. I want them to start fast and battle. The longer we can go like that in a game, you never know what will happen. Especially because Lazushin has been lights-out for us in goal. If we hit a bump in the road, I’ve explained to the guys that we need everyone to come together and help each other.