One point gained, one point lost 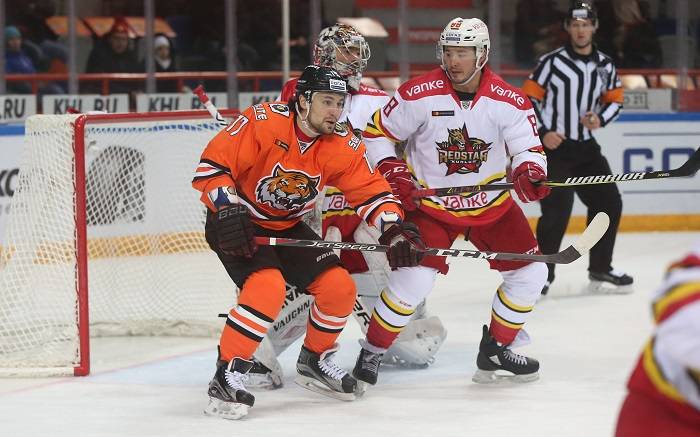 For a ‘glass half full’ kind of guy, this was definitely a point gained. Behind the eight ball early on after trailing 0-2, Red Star produced an instant riposte to tie the game. That secured a 2-2 scoreline in regulation and a point that closes us to within six of Traktor and the playoff places. Come the end of the campaign, points like these, snatched from losing positions, could be the difference-maker.

However, if one’s character tends to see the glass as half empty, another loss in overtime is a bitter blow. This has been a weak link all season, with Red Star losing all but one of the 10 games that were deadlocked after 60 minutes. Since defeating Slovan 4-3 in a shoot-out back on September 17, Red Star has lost eight out of eight in the extras. To make matters worse, Kunlun was millimeters away from the win: with 72 seconds left a Sam Lofquist thunderbolt caused panic in front of Evgeny Alikhin’s net; the puck dropped for Brandon Yip and his shot dinged off the bar and out to safety. It all happened so fast that the officials initially signalled a goal, only for a review to show otherwise.

It was a frustrating finish in a game where Red Star also failed to get off to a great start. Tomas Zohorna, Amur’s in-form Czech forward, opened the scoring in the third minute. Caught cold, we allowed another goal in the 13th. Then came the sudden fireworks. 23 seconds went by, and Martin St. Pierre got one back when he smashed home the rebound from a Joonas Jarvinen shot. Another 23 seconds and Brandon Yip tied the scores, exchanging passes with Justin Fontaine and firing home from between the hash-marks. The teams traded three goals in 46 seconds of play and Kunlun came out of it with the momentum to drive into the rest of the game.

Both goals were minor landmarks as well. For St. Pierre, it was his first since returning to China in January for a second spell in the Dragon’s Lair. With two assists in the previous game, this forward looks to be coming into form at just the right time. For captain Yip, meanwhile, that was his 18th goal of the season and it moves him ahead of Olli Palola in the race to be our top goalscorer this season. Like St. Pierre, Yip also followed up a productive game against Avangard with another point here.

However, it was not enough to inspire back-to-back wins. After a feast of goals came a long famine. Red Star was creating more chances, although Amur posed a threat on the power play. Alikhin found himself the busier of the two goalies as the visitor gradually assumed control over puck possession and time on offense. But Amur continued to show dogged defense – and head coach Curt Fraser paid tribute to the opposition’s efforts.

“I was hoping our team could take advantage of our speed and skill, but Amur did a great job of checking and shutting us down and not giving us many great looks,” he said.

Red Star continues on the road next week, visiting Sibir on Monday before heading to Admiral on Feb. 6 for the final game before the international break.