Errors punished, lessons to be learned 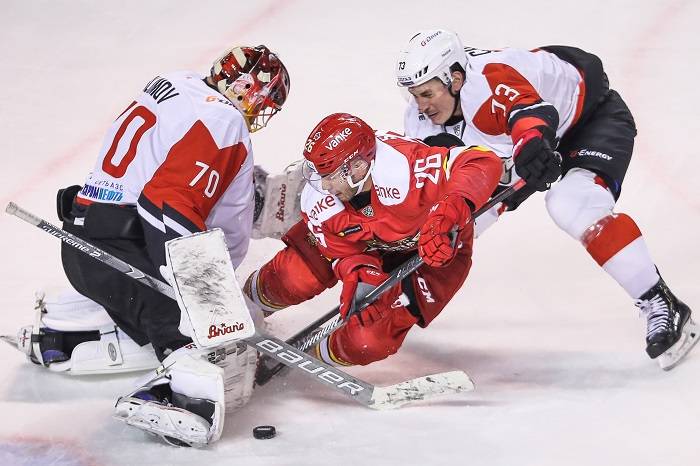 Against an Avangard team flying high at the top of the Chernyshev Division, Kunlun produced a frustrating display. The team failed to impose its game on the opposition and ultimately paid the price for a sometimes naive performance. Too many penalties, too many breakdowns in our play – it all added up to a game that presented far too many chances for the visitor to punish us.

There were a couple of changes to the roster. Long term injury victim Krisjanis Redlihs returned to the line-up and even collected his first point of the season, assisting on Justin Fontaine’s goal. The Latvian defenseman joined the club way back in October but managed just six appearances before getting hurt against Torpedo. Happily recovered, he’s now available to help down the final stretch of the regular season. Redlihs’ return freed up Zach Yuen to join the forwards and take a place on the fourth line instead of yet another victim of injury crisis, Chris Seto.

But a reshaped defense can do little when the team cedes the early initiative to the opposition. Unable to match Avangard’s early intensity, Red Star was perhaps fortunate to allow just one goal in the first period. It came on the power play: Michael Latta’s infringement punished by Ilya Mikheyev midway through the session.

Chasing the game, Kunlun came up with an answer early in the second period. Olli Palola, denied a goal last time out by a coach’s challenge, surprised Ivan Nalimov when he launched his wrister early from the center point. The game was emphatically back on, but penalty trouble again scuppered Red Star’s progress. The box door had barely opened to let Blake Parlett back on the ice when Maxim Chudinov restored Avangard’s lead; a 3-on-5 penalty kill survived the whole two minutes but Taylor Beck – remember him? – scored four seconds after Sam Lofquist and Lucas Lockhart returned to the game.

The goals kept coming at both ends of the ice. Fontaine surprised everyone with a rush down the right and a shot that flashed in front of Nalimov on its way into the net. Our former goalie left the game at that point, replaced by Igor Bobkov. Parlett also had some joy, producing a great finish from the right-hand face-off spot to get his first goal since returning from injury last week.

But it wasn’t all good news by any means. Avangard added three more in the final frame and had the puck in the net one more time only to be denied by a review. Mikheyev got his second of the night to wrap up the 6-3 win. In the words of coach Fraser, Red Star can and must do better.

The teams meet again on Monday in Shanghai as the current home stand comes to an end. After that, Red Star makes its last road trip of the season before returning to China to play out the regular season program.