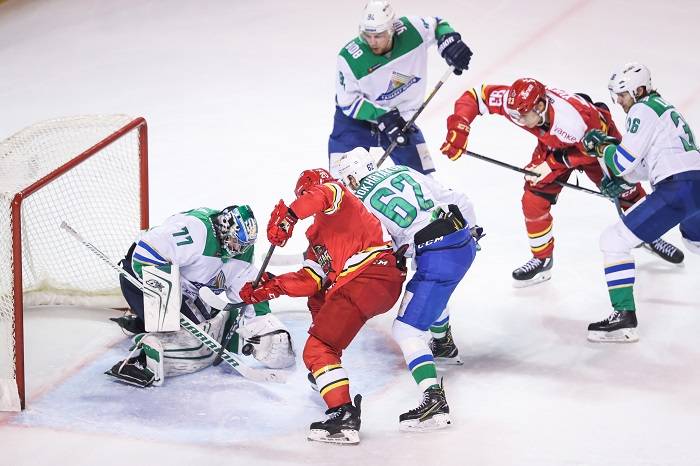 Red Star’s fourth and final meeting with Salavat Yulaev this season went the way of the preceding three. This time, though, it took a virtuoso display from visiting goalie Juha Metsola to deny our guys a reward from the game.

The frustrations of Tuesday night were still keenly felt. Kunlun had faced a team that had twice battered us on the road and come within five minutes of victory. The pain of that shoot-out loss turned into motivation for quick revenge. The first period saw Red Star blaze out of the blocks, taking the game to Ufa from the get-go. That pressure saw Metsola called into action to block a powerful Blake Parlett effort from the center point and survive two other scares before the puck finally found its home in the Salavat Yulaev net in the ninth minute.

Olli Palola celebrated after stuffing home the rebound from a Patrik Lundh shot – but that joy was short-lived. A sharp-eyed intervention from Nikolai Tsulygin prompted a review of the play and the coach’s challenge was upheld when Sam Lofquist was found to be narrowly offside as Red Star surged over the blue line. Worse soon followed: Maxim Mayorov went to the other end and put the visitor in front seconds later.

Down at the intermission, but far from out, Red Star had shown enough in the first frame to suggest that there was a way back into the game. Three minutes into the middle session, the scores were level. Ondrej Vitasek’s slap shot ripped past Metsola; Veli-Matti Savinainen, back from injury this week, got an assist to tally his first point since returning to action.

For a time, it felt like Red Star vs Metsola. The Finn would end the game with 37 stops and his stops to deny Victor Bartley, Brandon Yip and Lucas Lockhart were genuine game-savers. Savinainen also went close and the third period threatened to turn into one-way traffic. Red Star had 12 shots to four and spent almost three times as long on offense in that last session.

But Metsola was in no mood to yield and all that pressure counted for naught in the closing stages. Swedish international Linus Omark somehow battled his way out from behind Alexander Lazushin’s net and squeezed the puck through the goalie’s defenses to make it 1-2 with less than five minutes to play. A power play chance went begging for Red Star in the closing minutes and the final 90 seconds saw Kunlun replace Lazushin with a sixth skater but fail to turn a numerical advantage into a tying goal.

For the second time this week, then, the day ended in frustration. For head coach Curt Fraser it was a second successive loss – and arguably a second successive undeserved reverse. Although some of Tuesday’s problems were still visible, most obviously a need for more clinical play around the net, it is also clear that the changes behind the bench have given the team’s performance levels a lift. The playoff picture remains challenging, with time running out to make up that seven-point gap to Traktor, but this team is very much in that battle until the final shift.