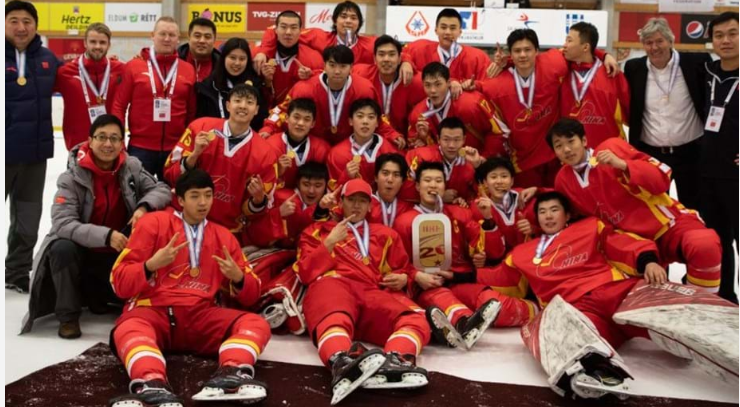 The next generation of Chinese hockey enjoyed a successful tournament in Reykjavik, Iceland, over the weekend. The national U20 roster won gold in its IIHF World Championship Division III competition, with eight Red Star youngsters contributing to the victory.

It was a goal-crazy week for the Chinese youngsters, who blasted 49 in five games as they powered through a four-team qualifying group before thrashing Turkey 12-1 in the semi-final and overwhelming Australia 5-1 in the final. That secures promotion for China, third time lucky after near misses in 2017 and 2018.

Head coach Jakob Kolliker, a two-time Olympian for his native Switzerland and an IIHF Hall of Fame inductee, was impressed with the way his team implemented its gameplan.

“They were disciplined the whole tournament,” he told IIHF.com. “I think this was the key, hard work and discipline. They stayed in the range and I’m happy about this. I’m pleased we could end the tournament with a medal.”

Red Star’s Qianyi Huang finished as the tournament’s leading goalscorer with 11, including two in the gold medal game. The 19-year-old has seen some experience with our KHL roster this season after impressing with our farm club in the VHL, where he has 7 (3+4) points in his first taste of men’s hockey. Huang also had eight assists, lifting him to 19 points for the tournament, one behind team-mate Juncheng Yan of the Victoria Grizzlies.

Defenseman Dehan Zhang was another notable performer. He tied for third in the scoring race with an impressive 14 assists helping him to 15 points. That display also earned him the award for best defenseman from the tournament directorate. Zhang, also 19, has been a regular with Heilongjiang, our Junior Hockey League team, this season and also had a couple of run-outs with the men in the VHL.

Sharing third place on the scoring chart, 17-year-old forward Jing Wang was one of the youngest players on the Chinese roster. He’s in his second season with Heilongjiang and had 5+10=15 points in Iceland. Jianing Guo, 18, was one point behind with 7+7.

The tournament also gave head coach Kolliker a chance to give some even younger players a taste of international action. Hanming Zong only celebrated his 17th birthday two weeks ago, but the defenseman was part of the roster in Reykjavik during his first full season of JHL action. Three more 18-year-olds, D-men Zhiao Jin and Erkang Fu plus forward Jilong Yu completed the Red Star party on the champion roster.

China’s success lifts the U20s to Division IIB of the IIHF World Championship. Next season the youngsters will face Korea, Croatia, the Netherlands, Belgium and Israel.