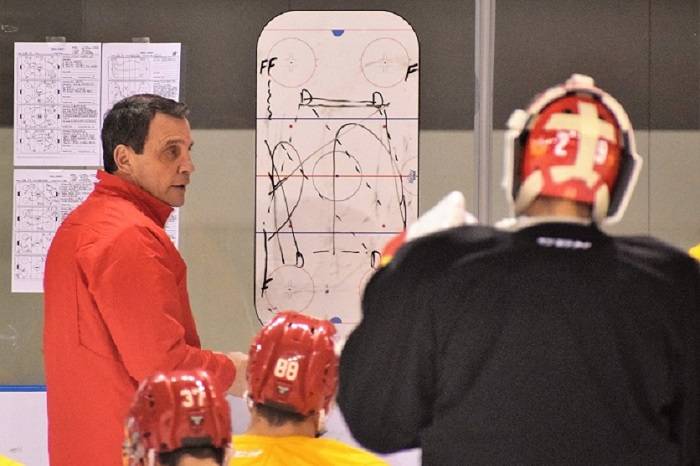 It’s the start of a new era for Kunlun Red Star – and it’s something of a baptism of fire for incoming head coach Curt Fraser.

The American, vastly experienced in the NHL as a player and a coach, joined the club last week following the departure of Jussi Tapola. After taking some time over the weekend to get to know the roster, he leads his team for the first time on Tuesday against Chernyshev Division big-hitter Salavat Yulaev. That’s the first of two games against the men from Ufa, swiftly followed by a double-header against table-topping Avangard, complete with our old friend Taylor Beck in fine form. In four road games against these opponents, Red Star has not tallied a single point: hopefully that record can change fast.

There is, finally, some encouragement from the treatment room. Defenseman Blake Parlett returned to the team last week after a month out of action. He skated 18 minutes of the game against Lokomotiv, suggesting he is close to full fitness once again.

Last time out: This season’s games in Ufa weren’t much fun – Red Star lost 0-5 and 4-7. Historically, though, the picture has been more favorable: in six head-to-head encounters, each team has three wins.

Familiar faces: Tomas Mertl finished the 2016-17 season in Ufa, playing 10 regular season game after leaving Medvescak. He also made five playoff appearances and totalled 5 (4+1) points. Defenseman Oskars Bartulis is unlikely to be fit in time for these games, but he also had a late-season spell with Salavat Yulaev last time around. He, too, had 10 regulation games and four more in the playoffs.

Background: It’s been an unpredictable season for Salavat Yulaev. On a good day, the team is almost unplayable; on a bad day, Ufa’s finest can look well below par. So far, we’ve seen them at their best – the task in China is to give them a thoroughly bad day. Recent results haven’t been all that impressive: Salavat lost its last three and hasn’t won in regulation in the last five attempts. Head coach Nikolai Tsulygin was lamenting the strain of an intense eight-game sequence; with players away at the All-Star Game over the weekend, not all of his players have had much time to rest since returning from Astana on Thursday.

Danger men: Those All-Stars included goalie Juha Metsola and forward Anton Burdasov, with the latter on a run of 6 (3+3) points in five games. Teemu Hartikainen has enjoyed himself against Red Star this season – the Finn has four goals and an assist from our first two meetings.

Last time out: Our two games at Avangard’s temporary home in Balashikha ended in losses, 2-4 in September, 1-5 in November. And so far, Kunlun has yet to beat the Siberians. There’s a first time for everything …

Familiar faces: Taylor Beck left Red Star to join Avangard on deadline day. In his time with us, the Canadian scored 35 (13+22) in 60 games. Earlier in the season, understudy goalie Ivan Nalimov also joined Avangard after just four appearances for the Dragons. Johan Sundstrom won’t get a chance to face his former Avangard colleagues; our Swede is still struggling with injury.

Background: Under the charismatic guidance of Bob Hartley, Avangard has impressed this season. Atop our Chernyshev Division and already assured of a playoff place, the Hawks have established themselves as serious contenders in the Eastern Conference despite being forced out of their home arena in Siberia and forced to play 3,000 miles away on the outskirts of Moscow. Perhaps it’s not surprising that Hartley and Team Chernyshev took the honors at the weekend All-Star Game. In recent games, though, the Hawks have been vulnerable to teams like ourselves, scrapping for a playoff place. Avangard’s last two losses came against Sochi and Vityaz, two teams in the thick of the battle for a Western Conference post-season spot.

Danger men: With 10 (7+3) points in eight games, Beck’s form since moving to Avangard makes him an immediate stand-out; he also enjoys this fixture, having scored in both previous editions this season while still a Red Star player. Young Artyom Manukyan starred in November, getting four assists, while All-Stars Ilya Mikheyev and Sergei Shirokov have led the scoring for the Hawks this season.