The route is clear – but the journey is hard 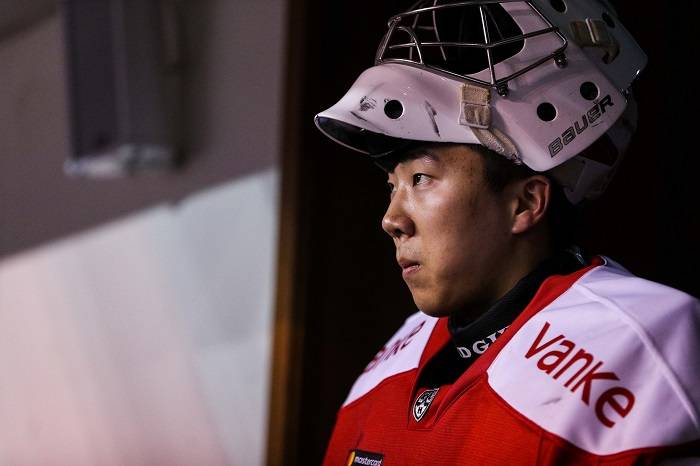 Chinese goaltender Sun Zehao has two distinguishing features among his Red Star teammates: he’s among the most popular and hardest-working guys on the roster.

Immediately nicknamed Sunny – for his character as much as his name – the 23-year-old’s infectious personality makes an impact on everyone he meets. You can see it on the team bus, where he often plays a video pinball game. It’s a simple diversion, but the reaction has been astounding. As it swept through the team like a virus, the likes of Kane, Lockhart, Nicholls and Fontaine soon caught the bug. It’s just part of the easy-going relationship he shares with his colleagues, proof that the right attitude can overcome the language barrier and put smiles on faces.

But a couple of months ago, Sunny faced some clouds during one of his toughest moments since joining the KHL team. It was in St. Petersburg, at SKA’s state-of-the-art training complex, on the eve of that game against one of Russia’s top teams. And Sun was left to watch the rest of the team prepare.

For the third goalie on any team, this is an occupational hazard. As gameday approaches, coaches often set up more targeted training sessions for the players who will take to the ice. That can mean that the starting and reserve goalies play the whole practice game. As third choice, Sun Zehao was left to practice his sliding on his own before sitting on the bench once the scrimmage started.

It’s not a good feeling.

After the session, Sun was alone in the locker room sadly packing up his kit. Team administrator Liu Chenbang, masseur Jiang Tianxiang and the other Chinese staff came in and saw how their colleague was upset. There was little to be said: “good effort, good training, keep it up.”

From the outside, it’s easy to assume that training hard is the bare minimum for a pro player. But the cost can be more than simple sweat and effort. When those labors still don’t bring more than a place on the sidelines – in sight of the action, but not yet part of it – many players find it hard to dig in. It’s easy to break down and slip away unnoticed.

But when you see Sunny the next day, as fresh and vibrant as ever, it’s impossible not to admire the man.

In Helsinki it happened again.

Sitting on the bench again, shivering in the cold, watching the team drill fast breaks, five-on-three. Suddenly, the coaches sent him to the ice. No warm-up, scant preparation, it took just a few seconds for a Savinainen shot to beat him at the near post.

“There’s a big difference between practice and games,” Sun reflected. “Training is more like a mechanical process; the players line up to take their shots at me and I know what’s coming. In the game, you need to read the play. I want to see the opponent's ideas before they can carry them out.”

Back in July, Sun featured in warm-up games in the Czech Republic. His performance against Avtomobilist – one of the most powerful offenses in the Eastern Conference – announced his arrival at this level. A spectacular display kept the opposition at bay until the dying seconds; only a late power play goal denied Red Star the win. Sun took the plaudits – ‘God mode’ was mentioned by the video gamers on the team. Funnily enough, the young goalie overslept before the game and kept his teammates waiting on the bus for 15 minutes; afterwards, Canadian winger Taylor Beck told him that he should sleep as long as possible if it helped him play like that.

It was a bright start, but there were no further chances at pre-season tournaments in Sochi or Petersburg. At those events he was in his day-to-day clothes, standing on the sidelines with the staff. And watching, learning, from the goalies on the ice – especially ones that share his diminutive physique in a position dominated by giants.

“A small goalie has an advantage: quick, quick responses,” Zehao explained. “That’s the path I need to go down.”

If there can’t be game time, Sun will always seize the chance to practice. On and off the ice, he has always worked himself to the point of exhaustion, perhaps verging on self-harm. For him, this is an unmissable opportunity to work in a professional environment for the first time and he is determined to grab it with both hands.

“My progress this year has almost been too much,” he said of his time with KRS. “My performance at the World Championship with China last April proved how far I had come. After watching the games, many of my old teammates got in touch online to tell me about it.”

It’s a huge contrast with the challenges of trying to learn hockey as a youngster in China, long before there was any progress on developing an infrastructure for the game. “After school, sometimes as late as eight in the evening, I used to train kids,” he said. “There was no dedicated goalie coach, our coach would just find some clips of a foreign goalie on a video. We’d watch on his cellphone and I’d record it using mine.”

It’s an unorthodox training regime and one that led to some odd gaps in the youngster’s game. After coming to Red Star, Sun was able to start working on the technical tools of a goalie’s trade and he has earned great praise for his attitude to the process. He’s also compiled something of a mantra:

2) Start to stand a little higher, then crouch as the opposition closes in;

3) Keep your mind alert and active.

You can find that three-point plan among the recordings on Sun’s phone. Whenever there is a spare moment, perhaps even lying in bed and struggling to get to sleep, these pointers on how to improve his play come out. Often, even when sleeping, he’s immersed in the theory of goaltending.

In his own words, whenever he sees others embark on a tailored training regime it makes him anxious, worried that the gap will grow ever bigger. With the national team, the pressure increases: every day, he pushes himself further for fear of being overtaken by the others. At Kunlun, he has been eager to learn from his more experienced colleagues, Lazushin and Nalimov, Brust and Karhunen. Lazushin, for example, advised on how to trim the back of the glove to get more flexibility for the left hand.

But theory is theory and right now, Sun is eager for games – the basic need of any pro. On the day before the game against Spartak, the coaching staff agreed to send him to the Silk Road League to gain experience. For Sunny, it was great news; nobody could begrudge the opportunity to a young player who had worked so hard to get it.

The story recalls basketball legend Gilbert Arenas. In a sportswear ad, he said: “The first 40 games of my career I sat on the bench. They said I was gonna play zero minutes. You know, I just think they didn’t see the talent that I had. Instead of sitting there being bitter, I just practiced, practiced. If no one believes in you, anything you do is a positive.”

Those zero minutes led Arenas to play with the number “0”; Sun wears 32: “There are 31 days in the month and I have to put in 32 days of effort.” It’s easy to believe his words, delivered with the energy of a guy who walks that walk every day.

His first game in the Silk Road League came. In the movies, it would be a stellar performance, a game-winning shut-out. But this is real life, and it ended with a defeat by a big score. No Hollywood ending yet, but for Sunny this is a career that is only just beginning. 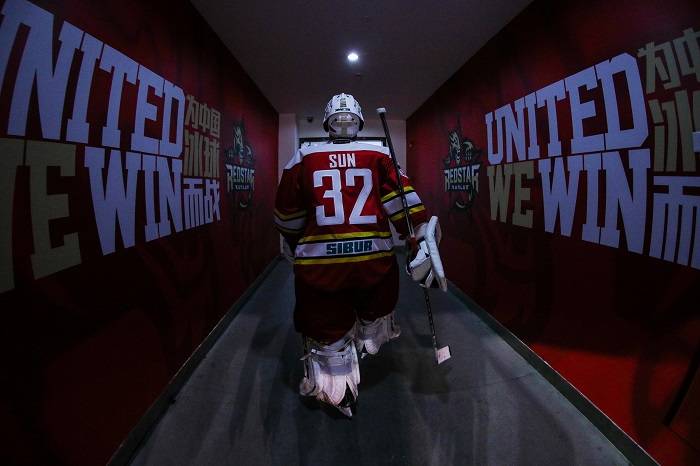