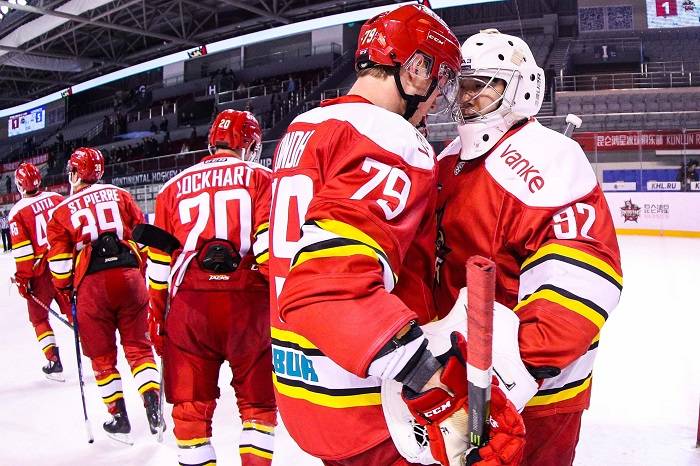 For many people associated with our club, today’s home loss against Lokomotiv was a day to forget. But for Sun Zehao, our 23-year-old goalie, this was unquestionably a day to remember. The circumstances were far from ideal for the young man from Harbin, but in the second period he became the first ever Chinese-born goalie to take to the ice in the KHL.

The game, sadly, was already lost. Red Star trailed 0-3 at the first intermission and was unable to recover from a double blast from Loko midway through the first period. Tomi Karhunen, our starter, continued after allowing two goals in 25 seconds around the 10-minute mark but a third goal from Andrei Loktionov four seconds before the hooter spelled the end of his evening. And handed Sun his chance.

It was a baptism of fire for the youngster, but he’s used to that. His previous appearance with the senior team came in a pre-season game against Avtomobilist’s expensively-assembled forward line and saw him standing on his head to frustrate Nigel Dawes & Co. until the dying moments as the teams tied 1-1 in the Czech Republic. For most of his time at the club, though, Sun has been involved at a lower level in the VHL.

The goalie also featured in the Asia League with the China Dragons and played club hockey for Chengde in the national championship before joining Red Star. He’s since gone on to help China’s national team move up to Division IIA of the IIHF World Championship and consolidate its position there. And, in the biggest game of his career to date, he let nobody down. Beaten twice in 40 minutes, he acquitted himself well and contributed to a performance that was arguably better than the final scoreline suggests.

Part of the reason for the heavy loss was Lokomotiv’s pacey, young roster. Sun, and other emerging talents such as Chris Seto, are the vanguard of Red Star’s efforts to build a youthful, energetic – and Chinese-eligible – core to its own team. In the words of head coach Jussi Tapola: “That’s one thing our approach is all about. It takes time, but we want to bring young Chinese players to this team. I’m sure we will see more of them next season.”

If Sun’s debut was a highlight, there were plenty of concerns for Red Star as well – not least the news that Traktor’s win puts a greater gap between our teams in the race for the top eight. Tapola was frustrated with all three of the goals Kunlun allowed in the first period – “these are the kind of big mistakes we have to cut out” – but saw improvements compared with the previous home losses against Jokerit and Severstal. “If you look at the flow of the game today, we played quite a good game,” he said. “It could have been 5-5. The way we played, the way we supported each other out there, that was all OK. We did a lot better than the last two games. But when you make big mistakes, and your opponent is so effective from those chances, you end up losing 1-5.”

Victor Bartley scored Red Star’s consolation in the 46th minute, putting a point shot beyond Daniil Isayev in the Lokomotiv net to make it 1-4. That wasn’t enough to change the game but did underline the coach’s claim that the performance was more competitive than the final scoreline.

Now comes a short pause for the All-Star Weekend, unfortunately without a Red Star representative this year due to an injury to Marc-Andre Gragnani. Next week sees our home stand continue with games against Salavat Yulaev.